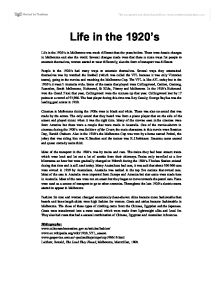 Life in the 1920s in Melbourne was much different than the years before. There were drastic changes in Melbourne and also the world.

Life in the 1920's in Melbourne was much different than the years before. There were drastic changes in Melbourne and also the world. Several changes made were that there is more ways for people to entertain themselves, women started to wear differently, also the form of transport was different. People in the 1920's had many ways to entertain themselves. Several ways they entertained themselves was by watched the football (which was called the VFL because it was only Victorian teams), going to the movies and watching the Melbourne Cup. The VFL is like AFL today but in the 1920's it wasn't Australia wide. Some of the teams that played were Collingwood, Carlton, Geelong, Essendon, South Melbourne, Richmond, St Kilda, Fitzroy and Melbourne. ...read more.

The only sound that they heard was from a piano player that on the side of the screen and played music when it was the right time. Many of the movies seen in the cinemas were from America but there were a couple that were made in Australia. One of the movies shown in cinemas during the 1920's was Soldiers of the Cross; the main characters in this movie were Beatrice Day, Harold Graham. Also in the 1920's the Melbourne Cup was won by a horse named Poitrel, the jokey that was riding him was K.Bracken and the trainer was H.J.Robinson. Erasmus came second and queen comedy came third. ...read more.

Most of the cars in Australia were imported from Europe and America but also some were made here in Australia. Most of the cars were run on steam but they began to move towards the petrol cars. Plans were used as a source of transport to go to other countries. Throughout the late 1920's electric trams started to appear in Melbourne Fashion for men and women changed enormously clean-shaven chins became more fashionable than beards and knee-length skirts were high fashion for women. Coats and stoles became fashionable in Melbourne. The ideas of these types of clothing came from the Chinese, Egyptian and the Japanese. Coats were transformed into a more casual which were made from lightweight silks and local fur. They also had coats that had a sensual combination of Chinese, Egyptian and Australian influences. ...read more.