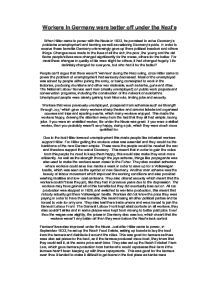 Life under the Nazis - who was better and worse off.

Workers in Germany were better off under the Nazi's When Hitler came to power with the Nazis in 1933, he promised to solve Germany's problems unemployment and farming as well as restoring Germany's pride. In order to receive these benefits Germany unknowingly gave up there political freedom and others things. Changes were made to the lives of all the rich, the poor, the young and the old. Some people's lives were changed significantly for the worse, others for the better. For most these changes in quality of life were slight for others, it had changed hugely. Life definitely changed for everyone, but who had it for the better? People can't argue that there weren't 'winners' during the Nazi ruling, once Hitler came to power the problem of unemployment had seriously decreased. Most of the unemployed was solved by people either joining the army, or being conscripted to work in the factories, producing munitions and other war materials, such as tanks, guns and rifles. . The National Labour Service sent men (mostly unemployed) on public work projects and conservation programs, including the construction of the network of autobahns. Unemployed people were clearly gaining from Nazi rule, finding jobs and security. Workers that were previously unemployed, prospered from schemes such as Strength through Joy,' which gave many workers cheap theatre and cinema tickets and organised courses and trips and sporting events, which many workers enjoyed. This made the workers happy, drawing the attention away from the fact that they all had simple, boring jobs. If you were an unskilled worker, life under the Nazis was great. If you were a skilled worker, then you probably weren't very happy, doing a job, which they were much more qualified for. Due to the fact Hitler lowered unemployment this made people like industrial workers support Hitler. For Hilter getting the workers votes was essential and they would be the backbone of the new German empire. ...read more.

In the League of German Maidens, they learnt about how to lead an ideal women's life, working at home and raising the children. Life was better for children, but not their parents, who could see what was going on, but couldn't do anything about it. They couldn't even safely criticise Hitler their children were so loyal to Hitler that they would inform the Gestapo that their own parents were criticising Hitler. The children were made so devoted to Hitler, that he came before his parents; they might not have even cared that their parents had been taken away because of Hitler. Life was much better and enjoyable under the Nazis for most of the children. They didn't even know they were being brainwashed to be largely loyal to Hitler. There were exceptions, such as the Edelweiss Pirates, who didn't want their lives controlled and resisted. Though, for most children, life seemed better under the Nazis from their point of view. Life for children was much worse, as their lives and minds were being controlled in a way in which suited the Nazis, not them. The army were much better off through Nazi rule. They drafted many workers many unemployed into the factories to make guns, tanks, rifles and munitions to boost up the force of the Germany army. Hitler also introduced conscription in 1935, which was essential, without the men, the army would be nothing. Under the control of Goering, Hitler also created a Four-Year Plan,'. Life was obviously tremendously better for the army under the Nazis, as now they were a priority and were more important and so the government paid more attention to the army, building them up and training them. For someone in the army, life was better under the Nazis, as the army was now getting more attention and finally, most importantly, getting rearmed. Rearmament showed the army that Hitler wanted a great German army again, and that Hitler may not be afraid to use it. ...read more.

German as a whole was better off with Hitler in charge as he helped to bring unemployment down to under 4 million but this came at a price. Women lost there rights to be able to work in order to a raise a family. The women was also forced to take lower paid, less advantage jobs in order to achieve Hitler's idea of a perfect world! He then later forced women into work with conscription due to the lack of man no longer available to fill the positions due to the demands of the armed forces. Hilter made sure he had total control over all of the workers, he used them to get the power he needed. He made sure that he had the votes of all of the higher class people by appealing to the business, by taking away trade unions it allowed the owners to pay people a certain wage without people going on strike. By getting rid of the trade unions, introducing his owns schemes he could make sure that workers did as they were told and kept in line. This made it harder for them to move up the ladder and would have helped the classes stay the same. With people restricted in getting better jobs many were forced to say in the same one with the same pay. People who couldn't get jobs were often conscripted into the army or placed in working schemes. Hilter also gave the workers opportunities to save up and receive discounts for trips and luxuries like attending the cinema. At one point he also made on where people would save tokens up in order to receive a discount one of the most popular cars at the time, this failed due to the car company going bankrupt. It may have seamed like the workers were getting a better deal but in reality they weren't. Hilter made false promises in order to receive there vote, he then changed there rights for the worst. They had lower wages for working more hours and didn't seek the rewards in which they had be told they would receive.HHil ...read more.