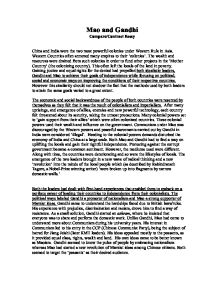 Mao and Gandhi Compare/Contrast Essay China and India were the two most powerful colonies under Western Rule in Asia. Western Countries often annexed many empires to their 'colonies'. The wealth and resources were drained from such colonies in order to fund other projects in the 'Mother Country' (the colonizing country). This often left the locals of the land in poverty. Gaining justice and equal rights for the denied had propelled both idealistic leaders, Gandhi and Mao to achieve their goals of independence while focusing on political, social and economic ways on improving the conditions of their respective countries. However this similarity should not shadow the fact that the methods used by both leaders to attain the same goals varied to a great extent. The economic and social backwardness of the people of both countries were resented by themselves as they felt that it was the result of colonialism and imperialism. After many uprisings, and emergence of allies, enemies and new powerful technology, each country felt threatened about its security, taking the utmost precautions. Many colonial powers set to 'gain support from their allies' which were often colonized countries. These colonial powers used their wealth and influence on the government. Communism under Mao was discouraged by the Western powers and peaceful movements carried out by Gandhi in India were considered 'illegal'. ...read more.

There were many common ideas that Gandhi and Mao incorporated in their movements. Both seemed to agree on the equality of human beings and encouraged this to be followed in their communes. Men and women were to be treated equally and hence, there was only class in China - the worker class. Gandhi even made all caste members to take turns in performing jobs considered menial (for lower castes) in his ashrams. Under the oppressive colonial rule of the West, both leaders felt that it was important to change the way people perceived themselves. Mao once said, "You have to be reborn to be a communist" and this was done, "by touching their souls". Steve Biko of the South African History's Apartheid Struggle had remarked a similar quote by stating, "the realization by the Blacks that the most potent weapon in the hands of the oppressor is the mind of the oppressor. Both Gandhi and Mao realized the importance of correcting the composure of every local of the country. In order to 'change the way of thinking', both Mao and Gandhi tried to impose a strong sense of nationalism in their character by interacting with the local peasants. As quoted by Nehru, the first Prime Minister of Independent India, "Gandhiji was the great peasant, with a peasant's outlook on affairs and peasant's blindness to some aspects of life..." ...read more.

Gandhi never expressed his hatred towards his enemies. He once quoted 'Hate the sin, love the sinner', when referring to the British. This was probably, to convince the local Indians not to hate the British, for what they were doing. Mao however, still did not choose ahimsa (non-violent) approach as he himself stated, "political power grows out of the barrel of a gun". His only satisfaction from these minor campaigns was that it helped China to realize the 'knowledge gained'. He once quoted, "If you want to know the taste of a pear, you must change the pear by eating it yourself. If you want to know the theory and methods of revolution, you must take part in revolution. All genuine knowledge originates in direct experience." These two great leaders worked out their methods of social reconstruction differently yet there was evidently some similarity. Mao, an ideal leader had supported his friends, the peasants, and provided equal rights, paving a path for a new revolution which would change their poor ways of living where as Gandhi another able leader who had defied the usual violent ways of gaining independence by Satyagraha. Their common objectives yet different methods rose to give birth to two new prosperous nations among the bloodshed. As Edwin H. Friedman had once quoted, "Leadership can be thought of as a capacity to define oneself to others in a way that clarifies and expands a vision of the future. ...read more.