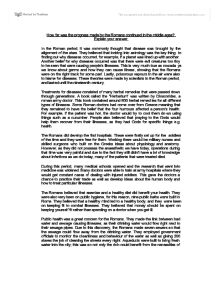 Medicine. How far was the progress made by the Romans continued in the middle ages? Explain your answer.

How far was the progress made by the Romans continued in the middle ages? Explain your answer. In the Roman period, it was commonly thought that disease was brought by the alignment of the stars. They believed that looking into astrology was the key thing to finding out why diseases occurred, for example, if a planet was lined up with another. Another belief for why diseases occurred was that there were evil creatures too tiny to be seen that were causing people's illnesses. This is very much true as nowadays we know about germs and how they can cause illness, showing that the Romans were on the right track for some part. Lastly, poisonous vapours in the air were also to blame for diseases. These theories were made by scientists in the Roman period, and lasted until the nineteenth century. Treatments for diseases consisted of many herbal remedies that were passed down through generations. ...read more.

They believed that a healthy mind led to a healthy body, and they were keen on keeping fit to combat illnesses. They believed that money should be spent on keeping yourself fit rather than spending on a doctor when you get ill. Public health was a great concern for the Romans. They made the link between bad water and sewage causing illnesses, as their drinking water would flow right next to their sewage pipes. Due to this discovery, the Romans made seven sewers so that the sewage could flow away from the drinking water. They employed government officials to monitor the cleanliness and behaviour of the water as well as giving 300 slaves the job of cleaning the streets every night. Aqueducts were built to bring fresh water into the city; this was so not only the rich could benefit from the necessities of life, but the common people too. They also found that the swamps were big carriers of the disease malaria - due to this, Julius Caesar had a large swamp drained and replaced it with a forest. ...read more.

As some of the population believed bad air had caused the disease, they thought of the solution that you should surround yourself by other smells as to not breathe in the contaminated air. One method consisted of sticking your head in a bucket that was filled with waste from the toilet. The four humours method was also followed, so people would try to balance them e.g. by draining "excess" blood from the body. However, some believed that all these methods were a waste of time and nothing could be done to cure the plague. To conclude, I think the progress made in the Middle Ages was much more delayed than the progress made by the Romans. The main reason for this is because of the occurrence of the Black Death. It was essentially an incurable disease and many people died. Despite the shocking number of deaths however, the Black Death did indeed lead to new revelations like the four humours. Overall, although it may have been a more delayed process, the Middle Ages did progress the discoveries and work done by the Romans. ...read more.