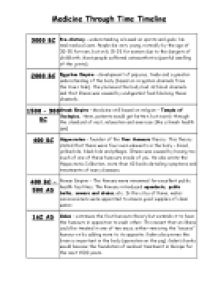 ﻿Medicine Through Time Timeline 3000 BC Pre-History ? understanding is based on spirits and gods. No real medical care. People die very young, normally by the age of 30-35 for men, but only 15-25 for women due to the dangers of childbirth. Most people suffered osteoarthritis (painful swelling of the joints). 2000 BC Egyptian Empire ? development of papyrus, trade and a greater understanding of the body (based on irrigation channels from the River Nile). They believed the body had 42 blood channels and that illness was caused by undigested food blocking these channels. 1500 ? 300 BC Greek Empire ? Medicine still based on religion ? Temple of Asclepius. Here, patients would get better, but mainly through the standard of rest, relaxation and exercise (like a Greek health spa) 400 BC Hippocrates ? founder of the Four Humours theory. This theory stated that there were four main elements in the body ? blood, yellow bile, black bile and phlegm. Illness was caused by having too much of one of these humours inside of you. He also wrote the Hippocratic Collection, more than 60 books detailing symptoms and treatments of many diseases. ...read more.

Families often shared housing, and living and working conditions were poor. People worked 15 hour days and had very little money. 1831 Cholera Epidemic. People infected with cholera suffered muscle cramps, diarrhoea , dehydration and a fever. The patient would most likely be killed by dehydration. Cholera returned regularly throughout the century, with major outbreaks in 1848 and 1854. 1842 Edwin Chadwick reports on the state of health of the people in cities, towns and villages to the Poor Law Commission (fore-runner to the Public Health Reforms). He highlights the differences in life-expectancy caused by living and working conditions. He proposes that simple changes could extend the lives of the working class by an average of 13 years. 1846 First successful use of Ether as an anaesthetic in surgery. The anaesthetic had some very severe drawbacks. In particular, it irritated the lungs and was highly inflammable. 1847 James Simpson discovers Chloroform during an after dinner sampling session with friends. He struggles to get the medical world to accept the drug above Ether. Doctors were wary of how much to give patients. Only 11 weeks after its first use by Simpson, a patient died under chloroform in Newcastle. ...read more.

1937-45 Florey, Chain work on producing penicillin as a drug. Their success will make the drug the second most finded project by the USA in WW2. They fund it to the tune of $800 million and every soldier landing on D-Day in 1944 has Penicillin as part of his medical kit. 1939 Emergency hospital scheme introduced – Funded and run by Government 1942 William Beveridge publishes the Beveridge Report. The report was the blueprint for the NHS 1946 National Health Service Act – provides for a free and comprehensive health service. Aneurin Bevan convinces 90% of the private doctors to enrol. 1948 First day of the NHS. Hospitals were nationalised, health centres were set up and doctors were more evenly distributed around the country. However, the popularity and costs of the NHS would rapidly spiral out of control. The £2 million put aside to pay for free spectacles over the first nine months of the NHS went in six weeks. The government had estimated that the NHS would cost £140 million a year by 1950. In fact, by 1950 the NHS was costing £358 million. 1953 Description of the structure of DNA 1961 Contraceptive pill introduced 1978 First test tube baby 1990s Increasing use of keyhole surgery, using endoscopes and ultrasound scanning, allowed minimally invasive surgery. 1994 National Organ Donor register created ...read more.