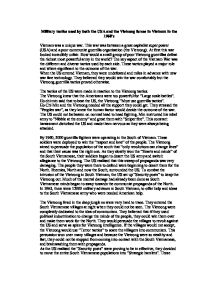 Military tactics used by both the USA and the Vietcong forces in Vietnam in the 1960&amp;#146;s

Military tactics used by both the USA and the Vietcong forces in Vietnam in the 1960's Vietnam was a unique war. This war was between a great capitalist super power (USA) and a poor communist guerrilla organisation (the Vietcong). At first this war looked incredibly unfair. How would a small group of poor Vietcong guerrillas defeat the richest most powerful army in the world? The key aspect of the Vietnam War was the different and diverse tactics used by each side. These tactics played a major role and where significant to the outcome of the war. When the US entered Vietnam, they were undefeated and miles in advance with new war fare technology. They believed they would win the war comfortably but the Vietcong guerrilla tactics proved otherwise. The tactics of the US were made in reaction to the Vietcong tactics. The Vietcong knew that the Americans were too powerful for "Large scale battles". Ho chi min said that to beat the US, the Vietcong "Must use guerrilla tactics". Ho Chi Min and the Vietcong needed all the support they could get. They stressed the "Peoples war", as they knew the human factor would decide the outcome of the war. The US could not be beaten on normal head to head fighting. Min instructed his rebel army to "Nibble at the enemy" and great them with "Sniper fire". ...read more.

These were more advanced versions of the "Security posts" but had fortified with deep moats and high fences to keep the Vietcong out. South Vietnamese soldiers defended the hamlets and the US provided all the help they needed to protect the Hamlets properly. Still, there were no large-scale numbers of troops in Vietnam. The "Advisors" were there to help the current South Vietnamese defence malitia. As the US aimed to protect the South Vietnamese from the Vietcong propaganda, they were failing. Hundreds of the South Vietnamese Defence Malitia left their army to join the Vietcong and fight for the North. The Vietcong persuaded the villagers inside the Hamlets to destroy their own defences when the South Vietnamese troops were not there. The Hamlets proved in affective as the people they were supposed to be protecting were destroying them from within. As the US watched from a distance, they realised that their current presence in Vietnam would have to be stepped up. The South Vietnamese needed the sheer manpower only the US could supply. In 1965, 600,000 US combat troops arrived in Vietnam. The scale of soldiers was huge. Ho chi min knew his policy of "Hit and run" would be the only way the US would be defeated. These "Guerrilla" tactics were employed effectively as the Vietcong proved to be resourceful and dogged. ...read more.

In 1968, the Vietcong launched the "Tet offensive". This was a complete surprise to the US for these reasons. There was no warning of the offensive. For such a large-scale operation, the Vietcong managed to disguise the offensive very well. The Offensive was completely the opposite of the current Vietcong tactics. The Vietcong were told by Min that they should not go in for "Large scale battles and big victories". Then out of the blue, over 70,000 Vietcong attack all over the country. Although the Tet Offensive was a failure for the Vietcong and they suffered great casualties, the US was shocked. The Tet offensive appeared as a defeat and a "Total disaster". Opinions changed and the US public mounted pressure on the government to end Vietnam. Every tactic the US employed never seemed to work. The Vietcong would always bounce back and the Tet offensive showed the world that they could strike any time, with no warning. If the Vietcong kept beating the US tactics, they could never be beaten. The US realised that they could not win and pulled out of Vietnam in 1973 with the scar of 53,000 dead for no obvious reasons. The "Guerrilla" tactics of the Vietcong had broken the US who aimed to break the Vietcong through manpower and money. The money was easily expended, but the lost lives scarred the US. Their tactics could not have been more different but the Vietcong's proved to be the more resilient and more dedicated. ...read more.