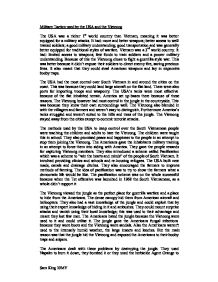 Military Tactics used by the USA and the Vietcong

Military Tactics used by the USA and the Vietcong The USA was a richer 1st world country than Vietnam, meaning it was better equipped for a military attacks. It had: more and better weapons; better access to well trained soldiers; a good military understanding; good transportation and was generally better equipped for traditional styles of warfare. Vietnam was a 3rd world country. It had: limited access to weapons; few funds to train soldiers and a poorer military understanding. Because of this the Vietcong chose to fight a guerrilla style war. This was better because it didn't expose their soldiers to direct enemy fire, saving precious lives. It also meant that they could steal American weapons and lay in expensive booby traps. The USA had the most control over South Vietnam in and around the cities on the coast. This was because they could land large aircraft on the flat land. There were also ports for importing troops and weaponry. The USA's tanks were most effective because of the flat inhabited terrain. America set up bases there because of these reasons. The Vietcong however had most control in the jungle in the countryside. ...read more.

Also the Americans weren't used to the intensely humid weather, the large insects and leeches. But the main reason was that the jungle hid the Vietcong and exposed the Americans to their booby traps and snipers. The Americans dealt with these problems by destroying the jungle. They used Napalm to burn it down, they bombed it or they used the herbicide Agent Orange to kill vegetation. They did this to expose and/or kill Vietcong members. By the end of the war the USA had destroyed 25,000 km� of vegetation in this way. With the dense canopy gone the Ho Chi Minh trails and the Vietcong were revealed. Also to cut down risks the USA used helicopters to transport troops rather than through the hazardous jungle. They also used gun ships to destroy enemy targets. These were useful as, unlike planes they could land without a runway. The Vietcong used the jungle to their advantage. They were sent weapons by North Vietnam through the jungle on the Ho Chi Minh trail. It was 80km wide in places and was protected by the dense rainforest. It carried: men, weapons and supplies and was 100km long. ...read more.

By the end of the war the Vietcong had dug 250km of tunnels. In 1965 the North Vietnamese Army invaded certain areas of South Vietnam. They now fought with tanks and hi tech weaponry and open, traditional style battles. The war was beginning to turn more traditional and the Vietcong now had strong backup to invade the cities and confront American tanks. On the date of the Tet festival 1968 the Vietcong and the NVA joined forces. They launched a traditional, non-guerrilla style attack on over 100 targets. They felt confident they could succeed because they were better equipped. They took a calculated risk and called it the Tet offensive. Fighting had now changed from guerrilla style warfare to out in the open, traditional war that left the Vietcong directly exposed to American fire. The NVA were also on the Vietcong's side. The Tet offensive stunned the Americans. They had thought they were winning the war. As a result off the Tet offensive America responded by increasing the bombing of North Vietnam. Also their search and destroy missions got very violent. An example of this was on the village of Mylai where the USA destroyed all life in the village, massacring women and children and innocent men. Sam King 10MY ...read more.