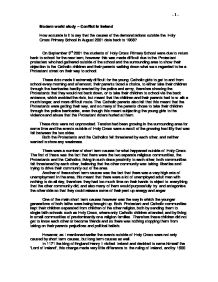 Modern world study - Conflict in Ireland How accurate is it to say that the causes of the demonstrations outside the Holy Cross Primary School in August 2001 date back to 1968? On September 3rd 2001 the students of Holy Cross Primary School were due to return back to school for the new term, however this was made difficult due to the Protestant protesters who had gathered outside of the school and the surrounding area to show their objection to the Catholic children and their parents walking down what was regarded to be a Protestant street on their way to school. These riots made it extremely difficult for the young Catholic girls to get to and from school every morning and afternoon; their parents faced a choice, to either take their children through the barricades hastily erected by the police and army, therefore showing the Protestants that they would not back down, or to take their children to school via the back entrance, which avoided the riots, but meant that the children and their parents had to walk a much longer, and more difficult route. The Catholic parents also felt that this meant that the Protestants were getting their way, and so many of the parents chose to take their children through the police barricades, even though this meant subjecting the young girls to the violence and abuse that the Protestant rioters hurled at them. ...read more.

The Protestant victory now meant that they had complete control over Ireland and the Catholics, and they intended to keep this control, the Irish parliament introduced penal laws, which were in place to keep the Catholics out of power. These laws stated that Catholics could not own large amounts of land, be properly educated, become a member of parliament or own weapons. This therefore made it extremely hard, if not impossible for a Catholic to gain any power whatsoever. I think that this is both a religious and a political reason for the troubles in Northern Ireland because the Catholics were being discriminated against simply because of their religion and they were not able to gain any political power to help themselves to gain equal rights. Towards the end of the 18th century many of the Catholics in Ireland decided that it was time to do something about the British rule over Ireland. They called themselves Nationalists because they wanted Ireland to become a separate nation from Britain. They fight between the Catholic nationalists and the Protestant unionists, who want to keep Ireland part of Britain, is the fight which still continues today in Northern Ireland and cause the events outside of Holy Cross Primary School. During the 18th and 19th centuries the Catholic nationalist attempted 3 revolutions, all of which failed. ...read more.

in 2001 was entirely about religious beliefs, I feel that the fighting was caused by the political situation in Northern Ireland, the fact that the minority Catholic group want more control over what happens in Northern Ireland and that the Protestants do not want to give up their level of control, which is why they did not want to let the Catholic families walk freely down their streets to get to Holy Cross Primary School. I think that the riots outside of Holy Cross where not entirely just about children walking down a street inhabited by a different religious community to get to school but about the fear the two communities have installed in each other during the short term causes such as the fighting. Both sides are scared that they will be driven out by the other. In conclusion I think that it is not accurate to say that the causes of the demonstrations outside the Holy Cross Primary School in August 2001 date back to 1968 because the causes of the conflict in Northern Ireland dates back many centuries. I believe that It would be correct to say that the troubles from 1968 onwards are a major factor in causing the demonstrations outside Holy Cross Primary School in August 2001 but that the actual cause dates back a lot further than 1968. Dara Brown 11AF ?? ?? ?? ?? - 1 - ...read more.