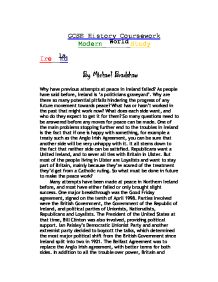 GCSE History Coursework Modern World Study Ireland By Michael Bradshaw Why have previous attempts at peace in Ireland failed? As people have said before, Ireland is 'a politicians graveyard'. Why are there so many potential pitfalls hindering the progress of any future movement towards peace? What has or hasn't worked in the past that might work now? What does each side want, and who do they expect to get it for them? So many questions need to be answered before any moves for peace can be made. One of the main problems stopping further end to the troubles in Ireland is the fact that if one is happy with something, for example a treaty such as the Anglo Irish Agreement, you can be sure that another side will be very unhappy with it. It all stems down to the fact that neither side can be satisfied. Republicans want a United Ireland, and to sever all ties with Britain in Ulster. ...read more.

All the major political parties involved in the Irish struggle sat down and compromised. It showed a major breakthrough, it showed that Republicans could accept people in Ulster choosing to be British instead of Irish. It showed that they could co-operate with other parties. Another major attempt at peace was the power-sharing executive. In 1972 Britain was in direct rule of Ulster. But in 1974, talks were held between the British Government, Politicians from the SDLP and the Ulster Unionist party decided that a new assembly should rule Ireland. Elections were held for a parliament in Ulster, with Catholics being treated as equals. The Unionists won, and a small minority of nationalists were invited to join the government. The Unionist Brian Faulkner and the Nationalist Gerry Fitt, as it was known, led the Power Sharing Executive. It was hailed a success by Republicans, as they were finally given a say in the ruling of Ulster, but extreme loyalists opposed the move, fearing it would lead to a United Ireland. ...read more.

But there is more than decommissioning holding the peace talks back. The fact that neither the Loyalists nor the Republicans are both satisfied if a compromise is offered. It is my personal belief that in ten years time, Britain will pull out of Ireland altogether and let Eire sort it out. It is impossible to solve the conflict, as the parties involved are constantly in a catch 22 situation. If Britain pulls out, the Loyalist contingent will be in uproar. If Britain never relinquish power, Eire would constantly be down the British Governments throats demanding power be handed over. The only way I believe that Ireland could move forwards is a very radical and almost impossible suggestion. I believe that Britain should pull out of Ulster, and if the Irish wanted direct rule, they should move to England. Even that would cause problems and frankly would never happen anyway. In short, I believe there can be no solution at this present time to the troubles in Ireland. ...read more.