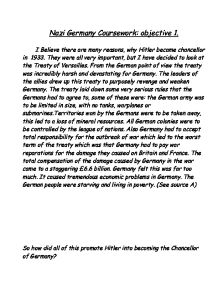 n**i Germany Coursework: objective 1. I Believe there are many reasons, why Hitler became chancellor in 1933. They were all very important, but I have decided to look at the Treaty of Versailles. From the German point of view the treaty was incredibly harsh and devastating for Germany. The leaders of the allies drew up this treaty to purposely revenge and weaken Germany. The treaty laid down some very serious rules that the Germans had to agree to, some of these were: the German army was to be limited in size, with no tanks, warplanes or submarines.Territories won by the Germans were to be taken away, this led to a loss of mineral resources. All German colonies were to be controlled by the league of nations. Also Germany had to accept total responsibility for the outbreak of war which led to the worst term of the treaty which was that Germany had to pay war reparations for the damage they caused on Britain and France. ...read more.

This increased the support for the Nazis and Hitler by a large amount. (See source B) During 1921 to 1923, the n**i party grew as quite a lot of Germans agreed with Hitler's beliefs. Next on Hitler's list were the reparations that Germany were paying. This was causing massive economic problems in Germany. Unemployment was soaring, and money began to lose its value. Hitler promised that if he was elected he would get rid of unemployment in Germany. He said that Germany had to stop handing over money to enemy nations. By doing this he was breaking the treaty yet again. This improved Hitler's support even more. We know this because: Karl Ludecke described to us a Berlin street "The n**i party flag was everywhere, huge posters and n**i slogans screamed from windows and shops." This proves just how important the impact of Hitler on the treaty of Versailles, was to gain support. ...read more.

The public had realized that Hitler was an answer to all there problems. This helped Hitler rise to power because he was becoming more and more popular. Also when the public looked for someone to blame for all this suffering, their searches finished with the Weimar republic as there culprits. They realized that the Weimar republic signed the treaty of Versailles and that's what caused the whole mess. This helped Hitler rise to power because the Weimar republic, were his enemies In the run for chancellor so with there loss of support, Chancellor of Germany was there for the taking. In this essay I have based my answer on one reason why Hitler was able to come to power, and I proved that there are a large amount of reasons why he was able to become chancellor by inter-linking the answer, I have shown how Hitler came to power and that the main reason was the treaty of Versailles. BY STUART DIXON ...read more.