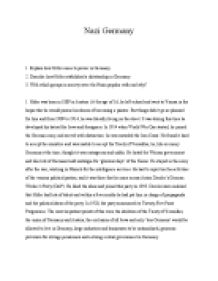 Nazi Germany - who supported Hitler and how did he become a dictator?

﻿Nazi Germany 1. Explain how Hitler came to power in Germany. 2. Describe how Hitler established a dictatorship in Germany. 3. With which groups in society were the Nazis popular with and why? 1. Hitler was born in 1889 in Austria. At the age of 16, he left school and went to Vienna in the hopes that he would pursue his dream of becoming a painter. But things didn?t go as planned for him and from 1909 to 1914, he was literally living on the street. It was during this time he developed his hatred for Jews and foreigners. In 1914 when World War One started, he joined the German army, and served with distinction: he was awarded the Iron Cross. He found it hard to accept the armistice and was unable to accept the Treaty of Versailles, he, like so many Germans at the time, thought it was outrageous and unfair. He hated the Weimar government and like lots of Germans held nostalgia for ?glorious days? of the Kaiser. He stayed in the army after the war, working in Munich for the intelligence services. He had to report on the activities of the various political parties, and it was there that he came across Anton Drexler?s German Worker?s Party (DAP). He liked the ideas and joined this party in 1919. Drexler soon realized that Hitler had lots of talent and within a few months he had put him in charge of propaganda and the political ideas of the party. In 1920, the party announced its Twenty-Five Point Programme. The most important points of this were the abolition of the Treaty of Versailles, the union of Germany and Austria, the exclusion of all Jews and only ?true Germans? would be allowed to live in Germany, large industries and businesses to be nationalized, generous provision for old age pensioners and a strong central government in Germany. ...read more.

After the 1932 elections, Hitler demanded the post of Chancellor from President Hindenburg. But he was suspicious of Hitler and refused. He allowed the current Chancellor Franz von Papen (an old friend of Hindenburg) to carry on as Chancellor. He then used his emergency powers to pass the measures von Papen had hoped would solve the unemployment issue. However, von Papen was soon in trouble. He had practically no support at all in the Reichstag and so called yet another election in November 1932. The Nazis again came out as the largest party, although their share of the vote fell. Hitler saw the election as a complete disaster for the Nazis. He had lost more than two million votes and also 38 seats in the Reichstag. The Nazis were starting to run out of funds, and Hitler is said to have threatened suicide. Hindenburg again refused to appoint Hitler as Chancellor, and instead in December he chose Kurt von Schleicher, one of his own advisers and a rival of von Papen, who remained as an adviser to Hindenburg. But within a month, Schleicher too was forced to resign, and by this time it was clear that the Weimar system of government was not functioning properly. In a way, Hindenburg had already overthrown the principles of democracy by running Germany with emergency powers. If he was to rescue the democratic system, he would need a Chancellor who actually had support in the Reichstag. Through January 1933, Hindenburg and von Papen held secret meetings with industrialists, army leaders and politicians and on the 30th of January, much to everyone?s surprise, they offered Hitler the Chancellery. They thought that with only a few Nazis in the Cabinet and von Papen as Vice Chancellor that they could limit Hitler?s influence and resist his extremist demands. The idea was that the policies would be made by the Cabinet, which was filled with conservatives like von Papen. ...read more.

This was very popular with the farmers, who could plan ahead, without being afraid of whether or not they would lose money. Farms were also declared to be hereditary estates, and on the death of the owner, had to be passed on to his next of kin. This meant that a farmer could not be forced to sell or mortgage his farm to pay off his debts, and this was welcomed by a lot of farmers who were very heavily in debt because of the financial crisis. The Nazis also gained the support of the Reichswehr, which was vitally important if they were to feel secure in power. The Reichswehr was the one organization that could have been able to remove Hitler and the Nazis from power, and yet by the summer of 1934, they had won it over. The officer class was friendly towards Hitler because of his declared aim of ignoring the restrictions of the Treaty of Versailles by rearming and expanding the army to its full strength. There had also been a steady infiltration of Nazi supporters into the lower ranks of the army, and this was beginning to work through to the lower officer classes. The army leaders were also greatly impressed by Hitler?s handling of the SA in the Night of the Long Knives. This relieved the Reichswehr of the SA and it impressed them so much that when President Hindenburg died less than a month later, the Reichswehr agreed that Hitler should become president as well as chancellor. The Nazis? anti-semitic policy was popular with many Germans to begin with. There were little over half a million Jews in Germany, and Hitler had decided to use them as scapegoats for everything: the humiliation at Versailles, the depression, unemployment, and communism. He also claimed that there was a world Jewish plot to take over. A lot of Germans were in such a desperate situation that they were prepared to believe the propaganda about the Jews. Lastly, the Nazis? foreign policy was extremely successful, and more and more Germans began to think of Hitler as infallible. ...read more.