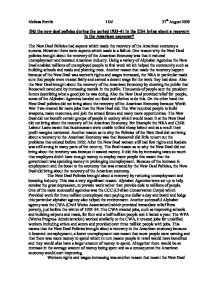 Another reason that made the New Deal a Success was that Roosevelt offered people relief and food. He managed this through some of the Alphabet Agencies such as FERA (Federal Emergency Relief Administration). FERA was an immediate relief for early 1933 until December 1935 it aimed to give the needy and their dependants the minimum standard of living and also to help maintain their physical well-being. Harry L. Hopkins, who headed FERA, was adamant that the relief the FERA provided should be work based and gave millions to states in order to start projects. FERA also provided food, clothes and shelter, helping in particular the homeless. The SSA replaces FERA in 1935. The SSA was a social insurance program consisting of benefits for retirement, disability, survivors, unemployment and for needy families. To qualify for the benefits people had to pay one lump sum at the beginning and then they would be given monthly cheques. Relief was also provided in the shape of other Alphabet Agencies which created Jobs. Jobs in themselves were a form of relief meaning that people didn't have to worry about how to feed their families or how they are going to pay for new clothes. The relief meant that people could get back on their feet and would have the encouragement to find a job and start supporting themselves and their families with out the government for assistance. ...read more.