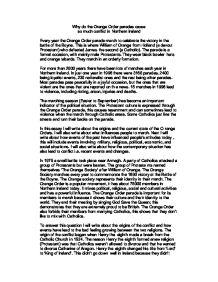 Why do the Orange Order parades cause so much conflict in Northern Ireland Every year the Orange Order parade march to celebrate the victory in the battle of the Boyne. This is where William of Orange from Holland (a devout Protestant) who defeated James the second (a Catholic). The parade is a formal occasion, with mainly male Protestants. They wear black bowler hats and orange tabards. They march in an orderly formation. For more than 2000 years there have been lots of marches each year in Northern Ireland. In just one year in 1996 there were 3160 parades, 2400 being loyalist events, 230 nationalist ones and the rest being other parades. Most parades pass peacefully in a joyful occasion, but the ones that are violent are the ones that are reported on the news. 15 marches in 1996 lead to violence, including rioting, arson, injuries and deaths. The marching season (Easter to September) has become an important indicator of the political situation. The Protestant culture is expressed through the Orange Order parade, this causes resentment and can sometimes lead to violence when the march through Catholic areas. Some Catholics just line the streets and turn their backs on the parade. In this essay I will write about the origins and the current state of the Orange Orders. I will also write about what influences people to march. Next I will write about how events of the past have influenced people's attitudes today, this will include events involving military, religious, political, economic, and social situations. I will also write about how the contemporary situation has also lead to conflict i.e. recent events and changes. In 1975 a small battle took place near Armagh. A party of Catholics attacked a group of Protestants but were beaten. The group of Protestants named themselves 'The Orange Society' after William of Orange. The Orange Society marches every year to commemorate the 1690 victory at the Battle of the Boyne. The Orange society represents their identity in their march. ...read more.

This is the fundamental basis of the conflict between Protestants and Catholics. All the divisions between the two religions have been a big contributor to any conflict that happens at an Orange Order march because the march is just reminding the Catholics of how they have been treated badly and given unfair treatment just because they are Catholic. This is likely to cause a violent reaction to some Catholics during a Orange Order march. The Easter rising was an attempt by some revolutionary nationalists to take control of Ireland and make it the Republic. This attempt failed and hardly anyone supported it. The British government decided to execute the leaders, this therefore lead to them becoming martyrs. After World War 1, there was big support for revolutionary nationalists, Britain solved this by dividing Ireland into Northern Ireland and the Republic of Ireland. The partition of Ireland in 1941 caused many effects in Northern Ireland over the years. 1963-67 the new unionist government promised Catholics fairer treatment. 1967-68 the Catholics get impatient at the slow pace of the reform. Then the Civil Rights movement begins. October of 1968-July of 1969 fighting breaks out between Protestants and Catholics at Civil Rights marches. In August 1969 British troops are sent in to keep the peace. Later on that year in November the I.R.A. provos start their fight against the British and unionists. During the whole of 1969 the unionist government brings in changes to the police, housing, elections and jobs. In August 1970 ordinary Catholics decide to oppose the violence and set up a new political party, the SDLP. A year later internment happens which is where the unionist government starts to imprison suspected terrorists without trial. Next month the Protestants set up the UVF and the UDA. In January 1972 b****y Sunday happens which is where British troops shoot at Civil Right marches. Later on that year in March the British government scraps the Northern Ireland parliament and begins to rule Northern Ireland directly from London. ...read more.

In March 2006 a lack of trust between the two major political parties in Northern Ireland has brought an impasse to the peace talks. The British and Irish Prime Ministers announce they are restoring the Northern Ireland assembly established by the Good Friday Agreement on the 6th of April 2006. On the 6th of September an independent report says that the peace process in making progress. Next month another independent report says that in Northern Ireland the Provisional Irish Republic Army has forsaken terrorism and violence in favour of peaceful political means. At the beginning of December the U.S. receive news of recent progress by the Irish and British government and local political factors on sharing power in Northern Ireland. As time goes on and the peace process gets stronger the chance of violence occurring at Orange Order marches gets less. The chance of peace happening in Northern Ireland gets better every day because peace is the main aim for the political parties. There have been breaches of cease-fires but the future in Northern Ireland looks better than it ever has done at this moment in time. Not all Orange Order parades cause conflict, but when violence occurs as a result it is because the Protestants are reminding the Catholics of the past. The Protestants are reminding the Catholics that they are the winners and the there will be 'no surrender'. This implies to the Catholics that they will always be treated as second class citizens, this can provoke them into violent actions. If the march at Drumcree isn't allowed to be complete it can cause violence, on the other hand if the march is allowed to be complete it can cause violence. Northern Ireland has caused lots of division's not just the two religions. The two religions only mix when Protestants feel the right to march. As long as this happens there is always going to be violence, on the other hand the peace process is moving in the right direction so there is a possibility that there will be a way to stop violence occurring that suits both sides. ...read more.