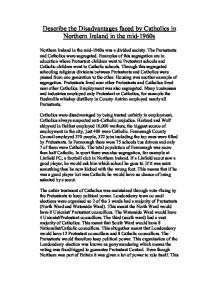 Describe the Disadvantages faced by Catholics in Northern Ireland in the mid-1960s Northern Ireland in the mid-1960s was a divided society. The Protestants and Catholics were segregated. Examples of this segregation are in education where Protestant children went to Protestant schools and Catholic children went to Catholic schools. Through this segregated schooling religious divisions between Protestants and Catholics were passed from one generation to the other. Housing was another example of segregation. Protestants lived near other Protestants and Catholics lived near other Catholics. Employment was also segregated. Many businesses and industries employed only Protestant or Catholics, for example the Bushmills whiskey distillery in County Antrim employed nearly all Protestants. Catholics were disadvantaged by being treated unfairly in employment, Catholics always suspected anti-Catholic prejudice. Harland and Wolf shipyard in Belfast employed 10,000 workers, the biggest source of employment in the city, just 400 were Catholic. Fermanagh County Council employed 370 people, 322 jobs including the top ones were filled by Protestants. In Fermanagh there were 75 schools bus drivers and only 7 of them were Catholic. The total population of Fermanagh was more than half Catholic. In sport there was also segregation, for example at Linfield FC, a football club in Northern Ireland. ...read more.

Paisley was one of the vicious anti-catholic prime ministers. He believed that all Catholics were a threat to Northern Ireland. He incited Loyalists to burn down Catholic houses and churches. He discriminated massively against Catholics in areas such as, employment and housing. He said there was a shortage of housing for Catholics because they breed like "rabbits" and multiply like "vermin". Why were British troops sent to Northern Ireland in August 1969? Troops were sent in to Northern Ireland because law and order was breaking down in Northern Ireland under the pressure of protests by the civil rights movement. In early 1968 protests were peaceful but by October 1968 protests held by NICRA led to violence mainly sparked off by the police, who used violent tactics to keep NICRA from entering Londonderry town centre. The Unionist government had banned NICRA from protesting in Londonderry town centre, so the police used violence to try and stop the protestors. NICRA was the Northern Ireland Civil Rights Association, who wanted everyone to be equal in Northern Ireland. They compared themselves to the successful black civil rights movement in the southern states of the USA. By August of 1969 the Protestant Apprentice Boys march around Londonderry was set to take place as it did every year. ...read more.

The ever growing number of violence, the failure of the Northern Ireland government and the intervention of the Irish Republic's leader Jack Lynch, made it urgent for the British government to be seen to be doing something. The growing number of violent incidents, like the Battle of the Bogside, lead to pressure upon the British Government as it showed them as being incompetent and not dealing with issues which involved Catholics. O'Neill, who was a moderate politician, couldn't deal with extremists. His reforms were too radical for his fellow protestants but not radical enough for his republican critics. This showed his reforms as being too rushed and him not being able to please everyone. The Irish Republic leader Jack Lynch moved ambulances and troops up to the Northern Ireland border; he accused the RUC of being a police force the Catholics could not trust and he asked the UN to send in a peace keeping force. This mounted more pressure upon the British government to address the issue of the RUC favouring Protestants. The British government sent in troops for the short-term to replace the RUC and maintain a fair policing system. This short-term solution was provided so in the long-term a political solution could be found. Without the British troops being sent there was a significant risk of civil war which had previously taken place in the 1920s partition. ...read more.