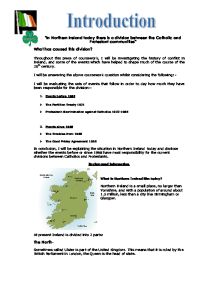 "In Northern Ireland today there is a division between the Catholic and Protestant communities" What has caused this division? Throughout this piece of coursework, I will be investigating the history of conflict in Ireland, and some of the events which have helped to shape much of the course of the 20th century. I will be answering the above coursework question whilst considering the following:- I will be evaluating the sets of events that follow in order to day how much they have been responsible for the division:- 1. Events before 1968 > The Partition Treaty 1921 > Protestant discrimination against Catholics 1922-1968 2. Events since 1968 > The Troubles from 1968 > The Good Friday Agreement 1998 In conclusion, I will be explaining the situation in Northern Ireland today and disclose whether the events before or since 1968 have most responsibility for the current divisions between Catholics and Protestants. ...read more.

The people of Northern Ireland disagree about the future of Ireland. One side wants to stay part of the UK. They are called Unionists. Hard line Unionists are known as Loyalists. Most of the Unionists are members of the Protestant community. Nationalist/Catholic groups include: SDLP- Social Democratic and Labour party: Founded in 1970, it's the main vice of peaceful (fiercely non-violent) nationalism (unlike the IRA) in Northern Ireland. It has influence with the Government in Dublin and the US Government. IRA- Irish Republican Army: Originally established in 1919, this organisation has been used violence, force and bloodshed to oppose the British presence in Ireland. The IRA is illegal in both the UK and The Republic of Ireland. The other side of Northern Ireland want to join the south and become part of the Irish Republic. ...read more.

They are both illegal, it does reprisal for IRA work. The two groups are very suspicious of each other. Although most Irish people do not support the use of violence, both sides have private armies that are willing to use the bullet rather than the ballot to solve the problem, to depict their strong views. They are preventing a peaceful solution to the conflict. The Governments of the UK and the Irish Republic have often disagreed about Northern Ireland. Their exact attitude varies depending on the political party in power, but since 1969 they have stuck to the same general idea. The Government in Dublin has always wanted a united Ireland. The British Government has often said that it will not withdraw from Northern Ireland as long as a majority of people of Northern Ireland wish to stay British. The brief description of the main ideas of Ireland's history is below. ?? ?? ?? ?? ...read more.