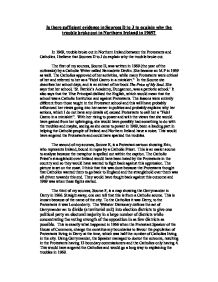 Is there sufficient evidence in Sources D to J to explain why the trouble broke out in Northern Ireland in 1969? In 1969, trouble broke out in Northern Ireland between the Protestants and Catholics. I believe that Sources D to J do explain why the trouble broke out. The first of my sources, Source D, was written in 1969 (the year of the outbreaks) by a Catholic Writer called Bernadette Devlin. She became an M.P in 1969 as well. The Catholics approved of her activities, while many Protestants were critical of her and referred to her as a "Fidel Castro in a miniskirt." In the Source she describes her school days, and is an extract of her book The Price of My Soul. She says that her school, 'St. Patrick's Academy, Dungannon, was a patriotic school.' It also says that the Vive Principal disliked the English, which would mean that the school was a Catholic Institution and against Protestants. ...read more.

The picture is set on the coast. I think that this was done because the Protestants thought that Catholics wanted them to go back to England and the stranglehold over them was all driven towards this end. They would have fought back against this outcome and 1969 was when these fights started. The third of my sources, Source F, is a map showing the Gerrymander in Derry in 1966. Straight away, one can tell that this is from a Catholic source. This is known because of the name of the city. To the Catholics it was Derry, to the Protestants it was Londonderry. The Webster Dictionary defines the act of Gerrymander as: to divide (a territorial unit) into election districts to give one political party an electoral majority in a large number of districts while concentrating the voting strength of the opposition in as few districts as possible. This is exactly what happened in 1966 when the Protestant Speaker of the House of Commons, change the constituency boundaries to favour the population of Protestants living in Derry at the time, which was half the number of Catholics living in the city. ...read more.

It is possible, but I doubt that the Protestant settlers would have ventured that far South into Ireland by then. Whether the source is true or not is not the case, however, because this is what the young Protestants would have been taught and had instilled within them, and along with it, a hatred for the Catholics. This would definitely be an explanation for the troubles that started in 1969. The fifth source, Source H, is a picture, taken in 1968. It shows RUC officers striking a civil rights marcher. The RUC (Royal Ulster Constabulary) was a Protestant Police force originally founded out of the Royal Irish Constabulary (RIC), the Belfast Borough Police Force and the Londonderry Borough Police Force. These were all Protestant Police forces. The picture shows a civil rights marcher being struck by 3 RUC officers. In Derry, this marcher would have been a Catholic and if this was a recurring incident within society in the years leading up to 1969 then it is certainly a reason as to why the troubles broke out. ...read more.