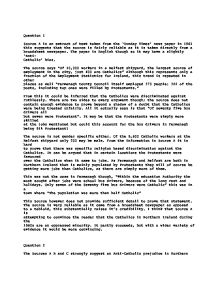 Question 1 Source A is an extract of text taken from the 'Sunday Times' news paper in 1961 this suggests that the source is fairly reliable as it is taken directly from a broadsheet newspaper. The paper is English though so it may have a slightly 'Anti- Catholic' bias. The source says "Of 10,000 workers in a Belfast shipyard, the largest source of employment in the city, just 400 are Catholics" Although this represents only a fraction of the Employment Statistics for Ireland, this trend is repeated in other places as well "Fermanagh County Council itself employed 370 people: 322 of the posts, including top ones were filled by Protestants." From this it could be inferred that the Catholics were discriminated against ruthlessly. There are two sides to every argument though; the Source does not contain enough evidence to prove beyond a shadow of a doubt that the Catholics were being treated unfairly. All it actually says is that "Of seventy five bus drivers all but seven were Protestant". It may be that the Protestants were simply more skilled at the jobs mentioned but could this account for the bus drivers in Fermanagh being 91% Protestant? The source is not gender specific either. Of the 9,600 Catholic workers at the Belfast shipyard only 500 may be male. From the information in Source A it is hard to prove that there was specific religion based discrimination against the Catholics. It can be argued that in certain locations the Protestants were favoured over the Catholics when it came to jobs. As Fermanagh and Belfast are both in Northern Ireland that is mainly populated by Protestants they will of course be getting more jobs than Catholics, as there are simply more of them. This was not the case in Fermanagh though, "Within the education Authority the most sought after jobs were school bus drivers, because of the long rest and holidays. ...read more.

No Catholic would ever call it Londonderry. The reminder of England is all too clear in the name (London) derry, Catholics know it simply as Derry. This makes the source less reliable, as it was taken by the 'enemy' of the house's resident. Source I shows the results of the local elections in Londonderry in 1966, again we can tell that this source came from a Protestant because the name of the town is Londonderry. I think this source shows gerrymandering. The majority of Catholics live in South Ward. 10,047 Catholics votes won only 8 unionist councilors. Whereas in North Ward only 3,946 votes by Protestants also managed to win 8 councilors only this time for the nationalists. The Catholic population is so condensed into one area that they can only hope to win any councilors there. If the Catholic population was as spread out an as even as the Protestants was then they probably would have won the entire election and been able to take control of their lives for once. Instead the Protestant government at that time forced the majority of the Catholics to live in the same area so that they would only be able to win a set number of councilors. Source I is very reliable as it comes directly from the voting record of Londonderry. The map in source J also provides some more information about voting, this source comes from Catholics as the town is referred to as Derry. It shows quite plainly that there is an East-West divide between the Catholics and the Protestants. The majority of the Catholics live on the Creggan estates in the west of Londonderry. In the center of the map is the walled town, this looks a bit like a fortress. The walled town is, as its name suggests, surrounded by walls. These walls either by intention or accident are keeping the Catholics out of the Protestant town. ...read more.

The women's peace movement in 1975 was actually lead by working class women, Betty Williams and Mairead Corrigan, they hoped to unite women against the fear of violence. This lasted two years before Protestants and Catholics attacked the movement and it disintegrated. The fact that the majority of the Northern Irish people want peace is a very hopeful fact. It shows that although there is a minority who wish to continue with the violence, they are a minority. The Good Friday Peace deal was set up in 1998 and is still active. This peace agreement, in my view is the fairest of all, according to the Good Friday peace Deal; "A 108-member Northern Ireland assembly takes over day-to-day running of the province" this is run by an executive committee of 12 people who in turn represent main parties. The first minister is David Trimble, his deputy is SDLP boss John Hume. Although the chief of the executive committee is a Protestant the Catholics are not under represented in fact Sinn Fein has a ministerial position in the committee. Some of the points of the agreement are; A North - South council created with representatives from Belfast and Dublin, they consult on matters of common interest like transport and the environment. The Irish government releases its claim on Ulster, they still want to unite Ireland again but only when there is support from the Protestants. The British law is changed so that if they wish it Ulster can leave the UK. This peace agreement in some way benefits both sides of the border. It is also a glimmer of hope to the people of Ireland who have been living under the threat of violence for most of their lives. All of the peace deals signify that the people of Ireland want an end to violence, but will there ever be an end if the peace deals keep failing? Matt Sharpe Ireland Coursework 13/10/00 * From Modern Ireland by Alan Dures ...read more.