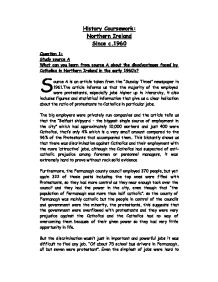 History Coursework: Northern Ireland Since c.1960 Question 1: Study source A What can you learn from source A about the disadvantages faced by Catholics in Northern Ireland in the early 1960's? S ource A is an article taken from the "Sunday Times" newspaper in 1961.The article informs us that the majority of the employed were protestants, especially jobs higher up in hierarchy, it also includes figures and statistical information that give us a clear indication about the ratio of protestants to Catholics in particular jobs. The big employers were privately run companies and the article tells us that the "Belfast shipyard - the biggest single source of employment in the city" which had approximately 10,000 workers and just 400 were Catholics, that's only 4% which is a very small amount compared to the 96% of the Protestants that accompanied them. This blatantly shows us that there was discrimination against Catholics and their employment with the more 'attractive' jobs, although the Catholics had suspected of anti-catholic prejudice among foremen or personnel managers, it was extremely hard to prove without rock solid evidence Furthermore, the Fermanagh county council employed 370 people, but yet again 322 of those posts including the top ones were filled with Protestants, so they had more control as they near enough took over the council and they had the power in the city, even though that "the population of Fermanagh was more than half catholic". ...read more.

The Source give us statistical information to give us an idea of who the people of Londonderry wanted in power and It turned out they favoured for the nationalists, who were predominantly Catholic instead of the mainly Protestant unionists. The table also tells us the areas of Londonderry affected the votes as it shows that the majority of southward had more nationalist votes as to the unionists at a rate of 10,047 for nationalists and 1,138 for the opposing unionists. The north ward was a different matter it had a very small number of votes and there was a slim margin, this time the unionists had the majority of votes with 3,943 for the unionists and 2,530 for the nationalists. Waterside had a similar outcome to but the number of nationalist votes decreased it was 1,852 for nationalists and 3,697 for the unionists. This clearly shows us division in Londonderry which leads me to think that the Catholics were outcasts and banished to the South ward with very poor conditions and shabby housing. Source F is a map of Derry showing the local electrical districts, which backs up with source E showing that the there was segregation because it has the areas highlighted where the Catholics are present and dominant. The east side of the map was where most Catholics were situated at; the west side was nearly fully catholic. ?? ?? ?? ?? ...read more.