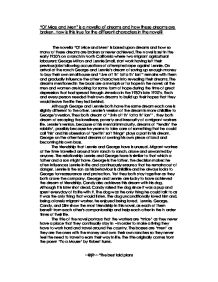 "Of Mice and Men" is a novella of dreams and how these dreams are broken. How is this true for the different characters in the novel? The novella "Of Mice and Men" is based upon dreams and how so many of these dreams are broken or never achieved. The novel is set in the early 1930's on a ranch in North California where two migrant agricultural labourers: George Milton and Lennie Small, start work having left their previous jobs following accusations of attempted rape against Lennie. On arrival at the ranch George and Lennie's dream of saving up enough money to buy their own small house and 'Live off th' fatta th' lan'" remains with them and gradually influence the other characters into revealing their dreams. The dreams mentioned in the book are a metaphor for hope in the novel; all the men and women are looking for some form of hope during the time of great depression that had spread through America in the 1930's late 1920's. Each and every person needed their own dreams to build up their hopes that they would leave the life they led behind. Although George and Lennie both have the same dream each one is slightly different to the other. Lennie's version of the dream is more childlike to George's version. They both dream of "Livin off th' fatta th' lan'", they both dream of escaping the loneliness, poverty and insecurity of a migrant workers life. ...read more.

But after some quick thinking Crooks backed out on the dream and returned to escaping reality through his books. The dream rescues outcasts like Candy, Crooks and Lennie who are deemed useless to society. Candy is the oldest worker on the ranch; he lost a hand in an accident and is near the end of his useful life on the ranch. Crooks; the only black ranch-hand, like Candy, he is also crippled. His nickname refers to a crooked back resulting from being kicked by a horse. He sleeps segregated from the other workers and is bitterer from discrimination. Crooks and Candy are useful to the reader though, as the both give the reader an insight into what life in America was like at the time for two outcasts; black and old. Curley and Curley's wife also point out during the book their dreams or ambitions. Curley's wife dreamt that she "coulda been in the pitchers" and opens up to Lennie about the time she was strung along by a man who claimed to be in the movie business. She was na�ve enough to believe that she "coulda been somebody" and still did, she was loathed to the fact she had married Curley, for if she had not then maybe she could've fulfilled her dream of becoming an actress. Curley's dream on the other hand was to become a professional boxer. Yet his dream was crushed, literally, by Lennie when the two had a fight one night on the ranch. ...read more.

He tells Lennie about his feeling - "It's just the talking. It's just bein' with another guy, that's all" - This touches on the desperate loneliness suffered by Crooks, and shows that he only has simple desires - just to talk to someone once in a while. In the end it all comes to nothing - nothing changes - no one reaches their dream. This makes you feel incredibly sad and sorry for the people left on the ranch. It also leaves you feeling quite annoyed at Lennie for although he didn't do any harm intentionally - if he hadn't killed Curley's wife, then George and Candy could've escaped their dreary lives that they'd wished they could escape. At this point in history, people were much less open about their feelings. They kept themselves to themselves, yet Steinbeck manages to effectively show the characters' isolation. All the characters in the book, to some degree or another, felt loneliness, which is the main theme. Steinbeck's style of writing really makes you feel sympathy for them; also it gives an insight as to what these people's lives during the depression were like. The novel goes full circle, ending in much the same situation as it began, at the same place. The very short time scale - just a Thursday night to a Sunday afternoon is also a prominent factor. To me everything previous exadurates the insignificance of what actually happened. Although such a huge impact is made upon the characters lives it doesn't even dent the wider spread issues of society or the world. By Sarah Mcentee 10e. ...read more.