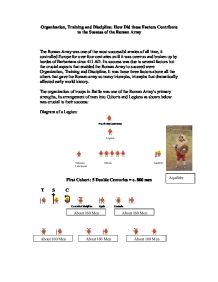 Organization, Training and Discipline: How Did these Factors Contribute to the Success of the Roman Army.

Organization, Training and Discipline: How Did these Factors Contribute to the Success of the Roman Army The Roman Army was one of the most successful armies of all time, it controlled Europe for over four centuries until it was overrun and broken up by hordes of Barbarians circa 411 AD. Its success was due to several factors but the crucial aspects that enabled the Roman Army to succeed were Organization, Training and Discipline. It was these three factors above all the others that gave the Roman army so many triumphs, triumphs that dramatically affected early world history. The organization of troops in Battle was one of the Roman Army's primary strengths, its arrangement of men into Cohorts and Legions as shown below was crucial to their success: Diagram of a Legion: First Cohort: 5 Double Centuries = c. 800 men T S C Centurio Primipilus Optio Centurio Second to Tenth Cohorts: 9 cohorts, 6 centuries each, total c.4320 men T S C Horsemen About 120 Key T = Tesserarius S = Signifer C = Cornicen (Horn Player) The soldiers who fought in legions like the one depicted above comprised the elite fighting force of the Roman Army. The strength and organisation of the legions varied in time and were probably not completely standardised throughout the army. The legio was a miniature army that contained within its ranks troops trained and equipped to perform all kinds of different duties both on and off the battlefield. ...read more.

Vegetius describes their training: "The first thing the soldiers are to be taught is the military step, which can only be acquired by constant practice of marching quick and together. For troops who march in an irregular and disorderly manner are always in great danger of being defeated. But the young recruits in particular must be exercised in running, in order to charge the enemy with great vigor. Leaping is another very necessary exercise, to enable them to pass ditches or embarrassing eminences of any kind without trouble or difficulty." All Roman recruits were also taught to swim which seems a very sensible idea, both for crossing rivers without bridges and to save lives in case of a ship sinking in battle. Vegetius elaborates on this point: "Every young soldier, without exception, should in the summer months be taught to swim; for it is sometimes impossible to pass rivers on bridges, but the flying and pursuing army both are often obliged to swim over them. A sudden melting of snow or fall of rain often makes them overflow their banks, and in such a situation, the danger is as great from ignorance in swimming as from the enemy. The ancient Romans, therefore, perfected in every branch of the military art by a continued series of wars and perils, chose the Field of Mars as the most commodious for their exercises on account of its vicinity to the Tiber, that the youth might therein wash off the sweat and dust, and refresh themselves after their fatigues by swimming. ...read more.

The Roman Leaders also knew that many battles were won and lost before any fighting had even taken place, they knew the importance of choosing the site of battle and the importance of different types of ground in relation to different units, Vegetius again: "Good generals are acutely aware that victory depends much on the nature of the field of battle. When you intend therefore to engage, endeavor to draw the chief advantage from your situation. The highest ground is reckoned the best. Weapons thrown from a height strike with greater force; and the party above their antagonists can repulse and bear them down with greater impetuosity, while they who struggle with the ascent have both the ground and the enemy to contend with. There is, however, this difference with regard to place: if you depend on your foot against the enemy's horse, you must choose a rough, unequal and mountainous situation. But if, on the contrary, you expect your cavalry to act with advantage against the enemy's infantry, your ground must indeed be higher, but plain and open, without any obstructions of woods or morasses." The real reason the Roman Empire was so victorious in its military conquests is because the men were so close to each other. Each man thought of the next as his brother. If he ran from battle, he was letting down his family, this was unbearable to think of, so men stayed by their brothers no matter what the odds of the battle were. ...read more.