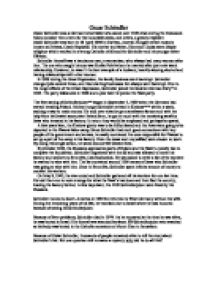 Oscar Schindler Oskar Schindler was a German Industrialist who saved over 1100 Jews during the Holocaust. Many consider him a hero for his honorable deeds, and others, a greedy exploiter. Oskar Schindler was born in 28 April 1908 in Zwittau, Austria-Hungary which today is known as Zvitava, Czech Republic. His mother and father, Hans and Louisa were deeply religious which resulted in a strong Catholic childhood for Schindler and his younger sister Elfriede. Schindler himself was a handsome man; a womanizer, who always had many women after him. The one who caught his eye was Emilie Pelzl whom he married after just a six week relationship. However, he wasn't the best example of a husband, heavily abusing alcohol and having relationships with other women. ...read more.

He took over a bankrupt enamelware factory and with the help from his Jewish accountant Itzhak Stern, he got in touch with the remaining wealthy Jews who invested in his factory. In return they would be employed and perhaps be spared. A few years later, the Krakow ghetto was to be fully cleared and the Jews were going to be deported to the Plazow labor camp. Since Schindler had such good connections with key people of the government and armies, he easily convinced the ones responsible for Plazow to set up a part of the camp in his factory. Even the weak and unqualified were chosen to work. By doing this single action, he saved around 900 Jewish lives. ...read more.

He told them not to vow revenge for what the Nazi's had done and then fled the country, leaving the factory behind. A few days later, the 1100 Schindlerjuden were freed by the Russians. Schindler moved to South-America in 1949 but returned to West Germany without his wife. During the remaining years of his life, he traveled a lot to Israel where he was honored because of saving his Schindlerjuden. Because of liver problems, Schindler died in 1974. As he requested at the time he was alive, he was buried in Israel. His funeral was attended by about 500 Schindlerjuden who watched as his body was buried in the Catholic cemetery on Mount Zion in Jerusalem. Because of Oskar Schindler, thousands of people remained alive to tell the story about Schindler's list. But one question still remains a mystery: why did he do all this? ...read more.