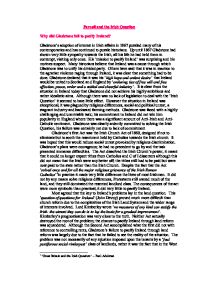 Parnell and the Irish Question Why did Gladstone fail to pacify Ireland?

Parnell and the Irish Question Why did Gladstone fail to pacify Ireland? Gladstone's adoption of interest in Irish affairs in 1867 puzzled many of his contemporaries and has continued to puzzle historians. Up until 1867 Gladstone had shown very little sympathy towards the Irish, all his life he had held them in contempt, visiting only once. His 'mission to pacify Ireland' was surprising and his motives suspect. Many historians believe that Ireland was a cause through which Gladstone was to unify his divided party. Others have said that it was in reaction to the agrarian violence raging through Ireland, it was clear that something had to be done. Gladstone declared that it was his 'high hope and ardent desire' that Ireland would be united to Scotland and England by 'enduring ties of free will and free affection, peace, order and a settled and cheerful industry'. It is clear from the situation in Ireland today that Gladstone did not achieve his highly ambitious and rather idealistic aims. Although there was no lack of legislation to deal with the 'Irish Question' it seemed to have little effect. However the situation in Ireland was exceptional, it was plagued by religious differences, social and political unrest, a stagnant industry and backward farming methods. Gladstone was faced with a highly challenging and unenviable task; his commitment to Ireland did not win him popularity in England where there was a significant amount of Anti-Irish and Anti-Catholic sentiment. ...read more.

As Eugenio F. Biagini points out in his book 'Gladstone', 'with the onset of the agricultural depression the extent to which Ireland had no been pacified became evident.' Just as the motives of the First Land Act have been questioned, so too have those of the Second. It was at this time that the Land League was particularly powerful. The Land League was believed to be active in promoting the wave of agrarian violence that was sweeping the country in what has become known as the Land War of 1879-81; a campaign launched by aggrieved farmers against a 'pestiferous' landlord class. Ireland seemed to be on the brink of social revolution, Gladstone believed that the only long term solution was further land reform. However, the 2nd Land Act has been described as 'less an economic policy than a political stroke to destroy the 'raison d'etre' of the Land League'. Act 2 was little better than the first in addressing Irish interests; Gladstone ignored calls from many land reformers for land reclamation and improvement that was desperately needed in rural Ireland. Instead he concentrated on removing the necessity for violence by granting the tenants their demands, still managing to avoid tackling the heart of the problem. The Act failed not only in this respect but also in the respect that it demoralised Land Lords whose control over their estates was waning. ...read more.