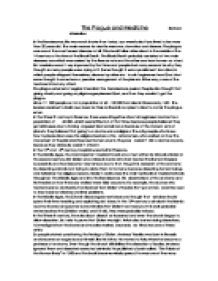 Plague and Medicine in the Renaissance

The Plague and Medicine Richard M�ekallas In the Renaissance, life was much shorter than today, you were lucky if you lived to be more than 30 years old. The main reasons for deaths were war, starvation and disease. The plague was one of the most feared diseases of all. This struck Italian cities about in the middle of the 14 century at the time of the Black Death. The Black Death probably consisted of two main diseases: one which was carried by the fleas on rats and the other one from human contact. But medicine wasn't vey improved by that time and people had many reasons for why they thought so many people were dying of it. Some thought it was a punishment from God, in which people whipped themselves, cleaned up cities etc to ask forgiveness from God. ...read more.

The poor couldn't visit a doctor anyway, because they obviously couldn't afford it. In the 15th and 16th century, hospitals were built in Florence. In the Middle Ages, the most important medical book was a text written by Claudius Galen in the second century AD. Galen was a Greek doctor who had treated the Roman Emperor successfully and had become very famous due to that. He got his research of the anatomy by dissecting animals and trying to relate them to humans, because dissecting human beings was forbidden for religious reasons. Galen's works were the main textbooks in medical schools throughout the Middle Ages and into the Renaissance. His observations of the anatomy and his theories on how the body worked were fairly accurate. For example, the doctors who treated Lorenzo de Medici, had learned from Galen's theories that spa waters could be used to treat Lorenzo's kidney and liver problems. ...read more.

Even though the church still disliked the dissection of bodies, Andreas ignored them and dissected executed criminals. He published a book called: "The Fabric of the Human Body" in 1543 and the book became widely spread. He was one of the many doctors who said that many of Galen's theories were wrong, but he was the only one who had evidence from his own dissections. There was a lot of criticism concerning Andreas' new ideas, he was bitterly attacked and in many universities, his works were banned for about fifty years. It was clear that the new ideas from Renaissance doctors came as a big shock to people who had been taught not to question traditional knowledge. Soon on, college professors started teaching their students from Vesalius' book and over the next century, many more discoveries were made concerning the human anatomy and especially the human heart. Dissection, observation and experimentation became an accepter way of improving medical knowledge. Renaissance doctor and a patient . "The Fabric of the Human Body" by Andreas Vesalius ...read more.