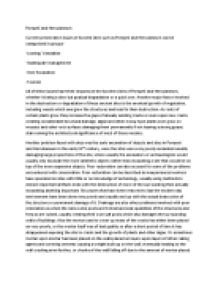 ﻿Pompeii and Herculaneum Current preservation issues of Ancient sites such as Pompeii and Herculaneum can be categorized in groups- -Looting/ Vandalism -Inadequate management -Over Excavation -Tourism All of these issues have their impacts on the Ancient cities of Pompeii and Herculaneum, whether it being a slow but gradual degradation or a quick one. Another major factor involved in the destruction or degradation of these ancient sites is the eventual growth of vegetation, including weeds which overgrow the structures and lead to their destruction. As roots of certain plants grow they increase the gaps of already existing cracks or even open new cracks creating considerable structural damage, algae and other mossy type plants over grow on mosaics and other rock surfaces damaging them permanently if not leaving a strong grassy stain ruining the architectural significance of most of those mosaics. Another problem faced with sites was the early excavation of objects and sites in Pompeii and Herculaneum in the early 19th century, were the sites were very poorly excavated usually damaging large proportions of the site, where usually the excavators or ...read more.

Another raised issue with the restoration process is the amount that is actually spent on restoring Pompeii, millions of Euros is spent by the government to keep restoring these sites but a proportion of the money disappears either being spent on unnecessary resources and sloppy work or going into the pockets of corrupt officials or the Camorra Mafia that inhabit the Neapolitan prefecture, as the Mafia find jobs as restoration firms and the money that is sent to them is actually used for the underworld and crime society of Italy. The main issue that ancients site such as Pompeii and Herculaneum face nowadays is tourism. The increase in middle classes around the world, faster ways to travel, television and other media to broadcast such attractions and overall cheap amount of money it is to travel, has greatly increased the amounts of tourists that Pompeii and Herculaneum get, figures show that Pompeii alone attracts more than 2. 5 million tourists each year. ...read more.

Another negative with tourists performing random acts of vandalism such as breaking into ?no zone? areas of excavation, or actually breaking some of the preserved stonework?s as a form of enjoyment, or to graffiti parts of walls or murals. A bigger issue with vandalism is not breaking some areas of the preserved sides but stealing, stealing is one of the biggest issues that sites like Pompeii and Herculaneum face as tourists who want actual legitimate souvenirs and don?t want to pay for replicas break of parts of stones, columns and mosaics, these ancient artworks are being destroyed every day as prying tourists break of parts of these mosaics to have as souvenirs or to sell on the internet. Even though a lot of damage is caused by tourists not all of it is intentional, such as the erosion of footpaths from overuse, and the wearing of large backpacks with usually unintentionally scrape walls or corners, or even damage caused by leaning on unsupported structures which sometimes ends in the falling of walls and columns. ...read more.