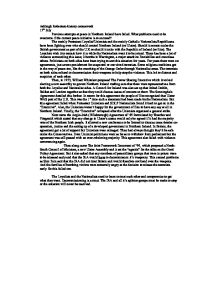 Previous attempts at peace in Northern Ireland have failed. What problems need to be overcome if the current peace initiative is to succeed?

Ashleigh Robertson-history coursework 17th July Previous attempts at peace in Northern Ireland have failed. What problems need to be overcome if the current peace initiative is to succeed? The mainly Protestant Loyalist/Unionists and the mainly Catholic Nationalists/Republicans have been fighting over who should control Northern Ireland (or Ulster). Should it remain under the British government as part of the U.K or should it unite with the Republic of Ireland (or Eire). The Loyalists wish it to remain how it is while the Nationalists want it to be joined. There has been a lot of violence surrounding this issue; 2 bombs in Warrington, a major attack on Enniskillen and countless others. Politicians on both sides have been trying to sort this situation for years. ...read more.

A Council for Ireland was also set up that linked Dublin, Belfast and London together so that they could discuss issues of concern to them. The Sunningdale Agreement detailed this further. In return for this agreement the people of Eire recognised that Ulster WAS port of the U.K. This was the 1st time such a statement had been made by the Nationalists. But this agreement failed when Protestant Unionists and SDLP Nationalists found it hard to get on in the "Executive". Also, the Unionists weren't happy for the government of Eire to have any say at all in Northern Ireland. Finally, the "Executive" collapsed after the Unionists organised a general strike. Next came the Anglo-Irish (Hillsborough) Agreement of '85 formulated by Thatcher and Fitzgerald which stated that any change in Ulster's status would only be agreed if it had the majority vote of the Northern Irish people. ...read more.

This agreement also failed with violence commencing again. Then along came The Joint Framework Document of '95, which proposed a North-South Council of Ministers, a new Ulster Assembly and it set the "agenda" for the talks on the Good Friday Agreement. But it also asked that any members of paramilitary groups that were in prison were to be released early and that the IRA would have to decommission it's weaponry. This caused problems as Sinn Fein said that the IRA did not trust Britain and would therefore not hand over the weapons. And the families of bombing victims were extremely angry at the decision to release the terrorists early. So this failed too. The Loyalists and the Nationalists need to learn to trust each other and compromise to get what they want. Decommissioning is a must. The IRA and all it's splinter groups must be made to stop or the situation will never be resolved. ...read more.