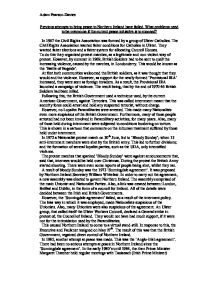 Previous attempts to bring peace to Northern Ireland have failed. What problems need to be overcome if the current peace initiative is to succeed?

Previous attempts to bring peace to Northern Ireland have failed. What problems need to be overcome if the current peace initiative is to succeed? In 1967 the Civil Rights Association was formed by a group of Ulster Catholics. The Civil Rights Association wanted fairer conditions for Catholics in Ulster. They wanted fairer elections and a fairer system for allocating Council Houses. To do this they organised protest marches, as a legitimate and non-violent way of protest. However, by summer in 1969, British Soldiers had to be sent to quell the increasing violence, caused by the marches, in Londonderry. This would be known as the 'Battle of Bogside'. At first both communities welcomed the British soldiers, as it was thought that they would end the violence. However, as support for the newly formed 'Provisional IRA' increased, they were seen as foreign invaders. As a result, the Provisional IRA launched a campaign of violence. The result being, that by the end of 1970 46 British Soldiers had been killed. Following this, the British Government used a technique used, by the current American Government, against Terrorists. This was called internment meant that the security force could arrest and hold any suspected terrorist, without charge. However, no Loyalist Paramilitaries were arrested. This made many Nationalists even more suspicious of the British Government. Furthermore, many of those people arrested had not been involved in Paramilitary activities, for many years. Also, many of those held during internment were subjected to conditions bordering on torture. ...read more.

Shortly after the agreement the Republicans, asked for clarification- it was obvious that they did not like it. The violence and tension continued as the newly-elected American President Bill Clinton, gave Sinn Fein leader Gerry Adams, an American Visa. This was so that Gerry Adams could meet with Irish American groups. Shortly after, Adams saw that John Hume was right in his ideas. It was the Ulster people, not the British Government, who were preventing a united Ireland. This in turn, led to the August 31st Nationalist Ceasefire. In response to this on October 13th, Loyalists also declared a ceasefire. As a result, of the 1994 ceasefires, both the Irish and British Governments issued their proposals for peace. Their plans included: * The early release of Paramilitary Prisoners. * A new assembly for Northern Ireland. * And a South - North Council of Ministers with influence over a range of issues. This 'Joint Framework' as it was known, was also the foundation of the 'Good Friday Agreement'. However, many Unionists did not like the 'joint framework'. It handed some of the governing of Ulster to Eire. Furthermore, in order to obtain peace, many imprisoned paramilitaries would be released early. This caused outrage in the families of victims. Also, as Sinn Fein would not trust the British Government, the Provisional Ira, refused to decommission. The American Senator George Mitchell was charged with heading the international commission. The aims of which, were to discuss the process of decommissioning. ...read more.

The segregation of the two communities, which virtually amounts to an apartheid, is one of the greatest obstacles. The Unionist and Nationalist communities, rarely meet en mass, without some violence. The two communities have isolated themselves from the other. They have their children taught in different Schools, never coming into contact with their neighbours, from the other community. Also, each communities support for those that are considered Martyrs by them; and perpetuating the perceived glamour of the violence. This image is being imprisoned upon the future generations. This can also be seen in each community's insistence on continuing their tradition, maintaining their hereditary rights to March. This is getting in the way of progress. Like the Murals celebrating Martyrs, their insistence on continuing past traditions and celebrating the past, is keeping them there. If progress is to be made, both communities should forget these traditions and look to further integration. The greatest obstacle to progress is still probably suspicion and ill-feeling. Many Nationalists are mistrustful of the British Government and many loyalists are suspicious of the Catholics. Whilst people still remember events such as 'b****y Sunday' and Families of Paramilitary victims, see their loved-ones murderers being freed early, for political gain, there will still be ill-feeling. However, even though there are still obstacles, some of these are being removed. Ian Paisley, who once refused to talk with what he called 'Catholic Scum', is now meeting with his Nationalist counter-parts, under the current agreement. This progress was not possible, even a few years ago. ?? ?? ?? ?? Adam Pearson-Davies ...read more.