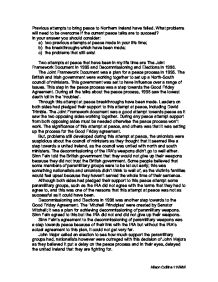 Previous attempts to bring peace to Northern Ireland have failed. What problems will need to be overcome if the current peace talks are to succeed? In your answer you should consider: a) two previous attempts at peace made in your life time; b) the breakthroughs which have been made; c) the problems that still exist Two attempts at peace that have been in my life time are The Joint Framework Document in 1995 and Decommissioning and Elections in 1996. The Joint Framework Document was a plan for a peace process in 1995. The British and Irish government were working together to set up a North-South council of ministers. This government was set to have influence over a range of issues. ...read more.

The decommissioning of the IRA's weapons didn't go to well either. Sinn Fein told the British government that they would not give up their weapons because they did not trust the British government. Some people believed that some members of paramilitary groups were to be let out early; this was something nationalists and unionists didn't think to well of, as the victim's families would feel upset because they haven't served the whole time of their sentence. Although both sides had pledged their support to this peace attempt some paramilitary groups, such as the IRA did not agree with the terms that they had to agree to, and this was one of the reasons that this attempt at peace was not as successful as it could have been. ...read more.

The IRA was very impatient at this moment and was setting off bombs in different places of Britain; a huge b**b was detonated in London's Docklands and another in Manchester. But the Loyalist ceasefire held and the elections took place without any violent incidents. As with any peace process, the two (or more) opposing sides must work together for the peace process to work. But the problem today with making successful peace processes is that there is a major lack of trust between nationalist and unionist political parties, the main two are, the Ulster Unionists and Sinn Fein. Ulster Unionists refuse to work alongside Sinn Fein, unless the IRA starts to disarm. Alison Collins 11VMW ...read more.