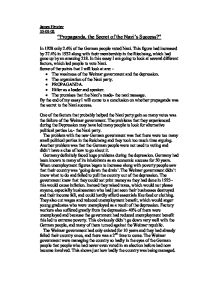 James Fletcher 10-03-02 "Propaganda, the Secret of the n**i's Success?" In 1928 only 2.6% of the German people voted n**i. This figure had increased by 27.4% in 1932 along with their membership in the Riechstag, which had gone up by an amazing 218. In this essay I am going to look at several different factors, which led people to vote n**i. Some of the points that I will look at are: - * The weakness of the Weimar government and the depression. * The organization of the n**i party. * PROPAGANDA. * Hitler as a leader and speaker. * The promises that the n**i's made- the n**i message. By the end of my essay I will come to a conclusion on whether propaganda was the secret to the n**i success. One of the factors that probably helped the n**i party gain so many votes was the failure of the Weimar government. The problems that they experienced during the Depression may have led many people to look for alternative political parties i.e.- the n**i party. The problem with the new German government was that there were too many small political parties in the Reichstag and they took too much time arguing. Another problem was that the German people were not used to voting and didn't have a clue of how to go about it. Germany definitely faced huge problems during the depression. Germany had been known to many of its inhabitants as an economic success for 50 years. When unemployment figures began to increase along with poverty people saw that their country was 'going down the drain'. The Weimar government didn't know what to do and failed to pull the country out of the depression. The government knew that they could not print money as they had done in 1923-this would cause inflation. Instead they raised taxes, which would not please anyone, especially businessmen who had just seen their businesses destroyed and their income fall, and could hardly afford essentials like food or clothing. ...read more.

n**i propaganda was also a very strong factor that led to the success of the n**i party. n**i propaganda was very powerful; their messages were contained in simple slogans such as, "Ein Volk, ein Reich, ein Furher" [One people, one Nation, One leader] The n**i propaganda was also always one step ahead from the other parties. I believe that the success of n**i propaganda was due to the way the party organised its propaganda and how it used the problems of the country and individuals. The next two pages show two n**i posters used in election campaigns. I have annotated them and analysed them to show what message they were conveying, how they were conveying it and who it was aimed at. n**i propaganda was not just posters. The n**i party portrayed its simple messages through other forms of propaganda as well. The Nazis had many newspapers under their control and each paper was designed to appeal to its own readership. This propaganda gained the votes of many people because again it was telling the reader what he or she wanted to hear. The n**i party also used pamphlets, direct mailing, soup kitchens, and huge rallies in many towns as very successful forms of propaganda. Josef Goebbles was appointed head of propaganda in 1929. It was his ideas that made the n**i propaganda such a success. It was he who came up with the idea of using the aeroplane and the latest technology, he organised massive press and poster campaigns and the distribution of free newspapers. His idea of having Hitler use an aeroplane rather than a car to travel enabled him to travel across the whole country in a matter of days, this was called 'Hitler over Germany'. It gave the Nazis a great advantage over the other parties because it made Hitler look efficient and very important. He could make a bigger impact on the whole of Germany because he could actually be seen live, rather than on the TV- much like Roosevelt did in 1932. ...read more.

Propaganda and organisation- Propaganda wouldn't have got anywhere without the thought behind it and the organisation in the n**i party. The n**i message and Hitler's image- Hitler helped to send a personal message at rallies when speaking to live audiences. The n**i message and the failure of the Weimar government- the n**i message mainly contained the problems that the Weimar government had experienced, and exploited them. Hitler's personality and organisation- Hitler's power as a speaker could be taught to people so that they could be persuasive as he was at rallies as local leaders. Looking at the links I have made and the investigating I have done throughout this essay, I would say, that in response to the question at the beginning of this essay, "Propaganda, the secret of the Nazis success?" I would have to say that I don't believe that it was. I believe that the main reason for the n**i success was because of the failure of the Weimar government during the depression. I think that the depression made more people concerned about the way the country was being ran, people who probably didn't even bother voting when the country was fine. As for the people who did usually vote, I believe that because the Weimar government failed they were forced to look for a strong alternative party than they had previously voted for. And since the n**i party were a small party, and they pounced on the opportunity for power people voted for them. I do not think that the n**i party would have been taken as seriously if the Weimar government had not failed. However, I am not saying that all of the n**i efforts were totally useless. If the had not made the efforts then they would have been easily beaten by the other parties. I think that it was a mixture of propaganda, organisation, Hitler's personality, the n**i message and the depression that led to the n**i success, but I believe that the main factor was the failure of the Weimar government and the depression of the early 1930's. ...read more.