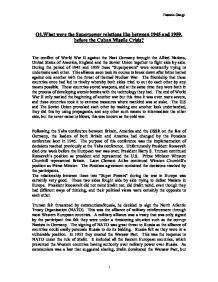 Q1.What were the Superpower relations like between 1945 and 1959, before the Cuban Missile Crisis?

Q1.What were the Superpower relations like between 1945 and 1959, before the Cuban Missile Crisis? The conflict of World War II against the Nazi Germany brought the Allied Nations, United States of America, England and the Soviet Union together to fight side by side. During the period of 1945 and 1959 these "Superpowers" were constantly trying to undermine each other. This alliance soon took its course to break down after bitter hatred against one another with the threat of thermal Nuclear War. The friendship that these countries once had led to rivalry whereby both sides tried to out do each other by any means possible. These countries stored weapons, and at the same time they were both in the process of developing atomic bombs with the technology they had. The end of World War II only marked the beginning of another war but this time it was even more severe, and these countries took it to extreme measures where mankind was at stake. The U.S and The Soviet Union provoked each other by making one another look underhanded, they did this by using propaganda, and any other such means to intermediate the other side, but the never came to blows, this was known as the cold war. Following the Yalta conference between Britain, America and the USSR on the fate of Germany, the leaders of both Britain and America had changed by the Potsdam conference later in 1945. The purpose of this conference was the implementation of decisions reached previously at the Yalta conference. Unfortunately President Roosevelt died one week before the European war was over; President Harry S. Truman continued Roosevelt's position as president and represented the U.S. ...read more.

with Cuba. In 1959 when Castro visited the U.S.A he wanted to make peace so that they would trade once again with them. However President Eisenhower did not want to meet him as he was playing golf and instead he sent Vice President Nixon whom then accused Castro o being a communist. He also stated that America would not trade with Cuba again. Castro was deeply insulted. The Cold War between the U.S.A and USSR seemed to be getting worse by the minute. In 1960 The Soviet Union confronted the U.S.A on television at a Paris summit accusing the U.S.A of spying. What Eisenhower did not know that they had shot down an American U2 spy pilot, his unknowing of his incident led to deny what Khrushchev said. After Khrushchev revealed to Eisenhower that one of your U2 planes had been flying over territory, Eisenhower saved himself the embarrassment and apologised. Khrushchev stormed out victoriously knowing that he had won the propaganda competition. Khrushchev was delighted now that he was even with America. Previously when the U.S.A had refused to trade with Cuban's. Castro offered the USSR to trade with them. The USSR excepted their offer, at the same time Khrushchev knew that he now has an ally just off the coast of the U.S.A. He agreed to buy to buy sugar cane, which saved the Cuban economy. In April 1961 the U.S.A made an embarrassing attempt to overthrow Castro. They had previously been funding the Cuban exiles in the U.S.A to go against Cuba. They then tried to attack the "Bay of Pigs" which was a very unsuccessful event for them, as they were defeated. ...read more.

Therefore on August 5th 1963 that year the United States, Great Britain and the USSR concluded a treaty to ban atomic testing in the atmosphere, in space and underwater. Underground tests were not banned. This test ban treaty showed how the two Superpowers were willing to co-operate with each other. In addition to this, a "hot line" for communication between Washington, D.C and Moscow was installed so that the U.S and Soviet government could contact each other directly in case of an international emergency. Over a period of time many different Presidents governed America, some good and some bad, but they all had different interpretations of communism. Which led to different political views and different ways of governing America. Now that "peace" was finally upon U.S.A and Russia, Vietnam was not. Now that North Vietnam were under control by the Vietnamese Communists who had opposed France and aimed for a unified Vietnam under Communist rule. Vietnamese who had collaborated with the French dominated the South. The United States became involved in Vietnam because they believed if all of the country fell under a Communist government, Communism would spread throughout Southeast Asia and beyond. This belief was known as the "domino theory". The U.S government therefore supported the South Vietnamese government. In 1971 the Salt 1 treaty was established between U.S.A and the USSR, this treaty was where they would agree not to deploy any missiles, and that both sides would dissemble their nuclear warheads. What led to these countries hating each other is that they both used propaganda, in a way that made the other side look belittled. In conclusion they are both to blame for their inconsiderate actions that could have led to a nuclear disaster where by mankind would have been destroyed Hasnain Gangji 1 1 ...read more.