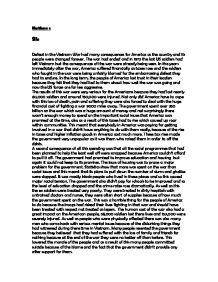 Nathan c Q2. Defeat in the Vietnam War had many consequences for America as the country and its people were changed forever. The war had ended and in 1973 the last US soldiers had left Vietnam but the consequences of the war were already being seen. In the years immediately after the war, America suffered financially as taxes rose and the soldiers who fought in the war were being unfairly blamed for the embarrassing defeat they had to endure. In the long term, the people of America lost trust in their leaders because they felt that they had lied to them about how well the war was going and now the US forces are far less aggressive. The results of this war were very serious for the Americans because they had lost nearly 60,000 soldiers and around 150,000 were injured. Not only did America have to cope with this loss of death, pain and suffering they were also forced to deal with the huge financial cost of fighting a war 9000 miles away. The government spent over 350 billion on the war which was a huge amount of money and not surprisingly there wasn't enough money to spend on the important social issues that America was promised at the time, also as a result of this taxes had to rise which caused up roar within communities. ...read more.

The main issues was the drugs, this was the way in which the soldiers forgot about what was really going on, on Vietnam it was easy to get hold of the drugs in Vietnam but when they got home it became much harder. Many ex soldiers turned to violent crimes in order to get what they needed. This resulted in crime rates rising and communities becoming worse by the day. Alcohol was something else that caused a problem, many of the men who drank became violent and aggressive, sometimes even towards there wives which often resulted in broken homes. Following the war, the Americans tried to 'purge the guilt' that the US felt about the war. Films such as platoon, born on the 4th of July and apocalypse now were made with a realistic view of what really happened during the war. Film directors were critical of American soldiers in an attempt to get them to see there wrong doings, hoping she would eventually be forgiven. The films also showed how wrong the tactics were- blaming the generals and politicians. They saw at first hand just how bad it was to fight in Vietnam and how guerrilla warfare wore down the soldiers, most of them just 19 years of age. They were also many long term consequences of the war, for example, America had to deal with the defeat of loosing the war which caused ...read more.

America has now stopped thinking she is invincible and is a little more careful of what she does after the consequences of the last war. In conclusion it is clear that the American involvement in Vietnam has had a number of important consequences in both the short and longer term and that it changed America. In the short term apart from being humiliated by a peasant army America felt the consequences of spending over $350 billion on fighting the war. Higher taxation and social problems were an issue throughout the 1970s. The soldiers were wrongly, in my opinion, blamed for the defeat when the defeat when the truth is the tactics and training were to blame. Only much later did the American people accept this? Finally defeat changed the way that America gets involved in other nation's problems. In the 1960s America was arrogant and she behaved as if she so powerful, that she could get involved in any dispute she wanted to, but Vietnam changed all that. Today she is far more reluctant to get involved and refuses to go it alone, now she will only send her troops if other countries or organisations like the UN is sending troops also, this is what it happening recently in Iraq. The president knows that the US people would not support any plan of getting involved by itself- the people would have to be listened to. ...read more.