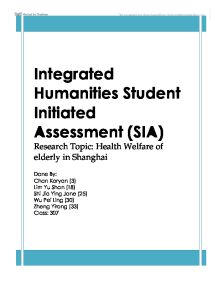 Integrated Humanities Student Initiated Assessment (SIA) Research Topic: Health Welfare of elderly in Shanghai Done By: Chan Karyan (3) Lim Yu Shan (18) Shi Jia Ying Jane (25) Wu Pei Ling (30) Zheng Yirong (33) Class: 307 Acknowledgements We would like to thank the following people for helping us greatly in completing our Integrated Humanities SIA: - Mr Mackintosh, for giving us valuable advices during the IH Consultations and being always so patient with us. - The parents and other elders, for being patient with us when we were interviewing them about the Shanghai elderly health welfare. - The authors and contributors of the essays and information that we found on the book and internet. - Our group members for all participating diligently in doing their assigned work. Abstract The topic we are doing is on the Shanghai elderly home and medical services welfare. The reason why we chose this topic is that Shanghai is now facing an ageing population hence we would like to find out how the Shanghai government is dealing with this problem and what they are doing to slow this process down. Our hypothesis is that the government is providing sufficiently in terms of home and medical services for the elderly, and we have been researching for articles online and by reading books to prove this hypothesis. In this research report, we will be finding out whether the government has been making efforts to provide for the elderly in medical and home services. According to our research, Shanghai is facing ageing population; therefore the government had been putting in efforts and investments to introduce a welfare scheme for the elderly in Shanghai. Our research has shown that the number of elderly is increasing rapidly and the government is doing more and more to provide sufficiently for the elderly hence the government, have been building and setting up more medial and home services to meet the needs of the growing number of elderly. ...read more.

Chapter 3: Limitations of research analysis/Justification of research method There are many limitations to this research that we chose to do on. Firstly, we couldn't decide on a welfare topic as China is a very big country and different regions have different sorts of welfare, some better than the others. In a country, there are many different aspects of welfare such as social, health and even animal welfare. Also, especially for China, each welfare topic has a very broad coverage. For example, China's health welfare includes elderly health welfare, medical welfare, animal health welfare, and many others. Hence we had to decide 2 very important topics for our research project, both which could affect the results of this assigment if not chosen wisely. Secondly, we do not know much about Shanghai's welfare system. This was a very big obstacle for us in both the project and the initial step where we chose our research topic. As we did not learn about China's welfare in school, we have little knowledge of it and the only way we can learn about it through external sources. This slowed us down at the start of the research as we have to spend a large amount of time learning and understand their welfare system ourselves before we can actually start on the assignment. Thirdly, as we have to research online for our SIA topic, we do not know if the sources we read are reliable, and needed to use our comparison and reliability skills to cross reference to make sure that our resources are not biased. Also, we had difficulty looking for sources from books as many libraries do not have books with updated information about the welfare in China, let alone Shanghai. Fourthly, as we are doing on welfare in Shanghai, most of the information would be written in Chinese. We had to Google for resources in Chinese, read through, understand and then translate in our own words into English for the report. ...read more.

We can tell the Shanghai government has been putting in effort to provide essential medical and home services for the elderly and these services have greatly helped the elderly. The government has also came up with different services to meet the different needs of the elderly, also increasing the number of services to accommodate all the elderly as the number of elderly is increasing rapidly. Based on the information we have found, we can thus match it with our hypothesis, and that the Shanghai government has been providing sufficient and efficient medical and home services for the elderly. Chapter 5: Conclusion In conclusion, Shanghai has put in much effort in providing care for elderly in comparison with the other cities. They provide many services which other cities do not have, including both community care and institutional care are provided or financed by the government, collective units, enterprises and individuals. The government made sure to upgrade all medical facilities and that each and every elderly in different parts of Shanghai gets the same up-to-date treatment and services. The elderly are treated equally regardless of status, class nor income, hence every single elderly have access to these services. We can also conclude that the Shanghai's government is not corrupted as all their people are treated fairly. Shanghai's welfare for the elderly has improved a lot over the years and we can tell from the research that Shanghai's government has spent a huge sum of money on these improvements. Hence we can also conclude that Shanghai's economy is flourishing in order for the government to carry out such a large scale upgrades in every single part of the country. As such welfare is a heavy burden for the country to have, having to pay for medical and other services for all its elderly. Hence, our hypothesis is proven correct by our researches that Shanghai has indeed been managing their ageing population in a very effective method. We can see that the government view this as a serious matter and has been treating the matter of their ageing population and caring for their elderly promptly. ...read more.