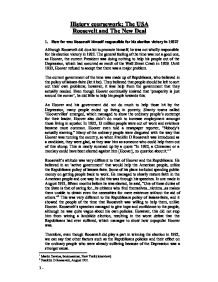 Roosevelt and The New Deal

History coursework: The USA Roosevelt and The New Deal 1. How far was Roosevelt himself responsible for his election victory in 1932? Although Roosevelt did do a lot to promote himself, he was not wholly responsible for his election victory in 1932. The general feeling of the time was not a good one, as Hoover, the current President was doing nothing to help his people out of the Depression, which had occurred as result of the Wall Street Crash in 1929. Until 1932, Hoover refused to accept that there was a major problem. The current government of the time was made up of Republicans, who believed in the policy of laissez-faire (let it be). They believed that people should be left to sort out their own problems; however, it was help from the government that they actually needed. Even though Hoover continually insisted that 'prosperity is just around the corner', he did little to help his people towards this. As Hoover and his government did not do much to help those hit by the Depression, many people ended up living in poverty. Shanty towns called 'Hoovervilles' emerged, which managed to show the ordinary people's contempt for their leader. Hoover also didn't do much to increase employment amongst those living in squalor. In 1932, 13 million people were out of work and evictions became more common. ...read more.

This made Roosevelt incredibly furious; however, he had to back down and accept the decision made by the Court. He also asked the Court to allow him to appoint six new judges who were more sympathetic to the New Deal. This shocked many people, as it seemed that Roosevelt was trying to attack the American system of government. In the end, his plan was rejected; however, the Supreme Court was able to see that Roosevelt was not frightened of them, and that he wouldn't be afraid to challenge them again. So, even though there were quite a few groups that opposed Roosevelt, the strength of this opposition was not strong enough to overcome him. This is shown by the fact that he continued to win elections with landslide victories, proving that even though there were those who opposed it, the majority of American people supported the New Deal in favour of the Republican policy of laissez-faire. This is also shown by the fact that Roosevelt won 42 out of the 48 states and the fact that he was elected President four times. Roosevelt knew how much opposition he had to face; however, he also knew that the majority of people were with him. In a quote that sums up what he thought of the opposition he faced, he said, "Everybody's against me except the electorate."3 3. ...read more.

This led the country through a recession in 1937, which lost Roosevelt a fair amount of popularity. A few middle-class voters lost their confidence in him; however, he was still hugely popular with most of the ordinary Americans. The only other person that was faced with the problems that Roosevelt had to face was Hoover, and it is obvious to see that Roosevelt tackled the problems in a much better way. The New Deal he gave to the ordinary people gave them hope, as it meant that they received the help they needed, and this was unlike the policy of laissez-faire that Hoover adopted. Unlike Hoover, Roosevelt managed to restore faith in the ordinary Americans, and he also partly managed to solve the problem of mass unemployment, even though it was World War Two that brought it to a near end. This was much better than anything that Hoover attempted to do. Therefore, we can say that the statement is quite accurate, as the New Deal was partly a success, but the influence of World War Two had a greater impact on the lives of the ordinary people, as it was what put an end to mass unemployment in the country. The New Deal was not a complete failure, as we have to keep in mind that the situation Roosevelt received was not that great. He had to deal with mass unemployment and a disheartened attitude from the American citizens, and it is clear that Roosevelt managed to improve both these things while he was in office. ...read more.