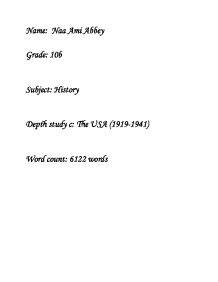 Source E shows Roosevelt trying very hard to work the pump. The pump is representing the American economy. The image of the weighed-down tax payer shows how the high classes had to pay for the taxes Roosevelt had imposed in order for him to improve the economy. It can be seen from the cartoon that the pump was leaking. It also shows how Roosevelt's face expression seems like he is happy that is he doesn't really care about what is happening to the economy but the taxes he is imposing on the rich. This tells us that Roosevelt is putting more money into the economy, which still has existing leakages thereby causing $16 billion to waste. Source F shows Roosevelt throwing away all the things that Hoover left behind with Hoover being in the background reading a news paper telling us that he is leaving the White House and is reading a timetable for a new job. Roosevelt has his sleeves rolled up as if he is a fighter (he had fought polio when he was young) and was willing to fight for the Americans if there was a need to. The trash can looks fairly huge which shows that it was full of Hoover's empty promises and beliefs. In the trash can there is a scare crow attached wearing a tattered looking rag with the words "Rugged individualism" the idea that Hoover was upholding while in office that gave him a bad reputation during the depression. Another phrase in the bin is "Prosperity is around the corner''. Roosevelt was not promising the people false hope. He knew that prosperity could not just come you had to work hard enough for it. The last phrase in the bin is "car in every garage" gives us the idea that Hoover is assuring the American people that they did not have to work hard enough in order to overcome the depression. ...read more.

Source F gives us an encouragement as we can see that Roosevelt is trying to do away with all the things that Hoover left behind. It gives the American people some confidence that Roosevelt was indeed trying to get rid of the things that had brought about the depression. Source G shows the affect that the New Deal has had on Congress and the American economy. It shows the Congress being belittled as a result of the New Deal. Sources H and I show the positive effects that the New Deal had on the American people. It gives praises about how Roosevelt's New Deal had helped the people. They are a perfectly good example of what a positive affect the New Deal had on people that were not accustomed to much; "My wife and I are old folks and don't amount to much," therefore making them feel cared for; ."..We'll not be neglected...." Source J gives us an idea of how Roosevelt's New Deal made the American people depend so much on government relief and aid, and how it has made the people lazy. Due to one of the alphabet Agencies; the NRA, which was set up to; increase workers wages, to increase prices of the factory goods, and to give workers a fairer deal in their work places. Source K, on the other hand, is showing us the point of view from someone who worked with Roosevelt, which was something that we have seen/heard little of. I believe that this source is offering us the point of view of the ideas that people that created the Ned Deal, had in mind for the Americans. This was a fresh start in life, to look towards the government for help that had never been offered, to be able to look at the positive side of the New Deal; it was an opportunity for everyone to work together to re-build their lives. I believe this source although obviously biased is useful in the way that it is the only one that offers us a view into how the New Deal affected the people in government. ...read more.