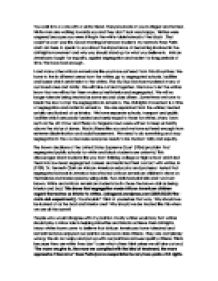 Rosa Parks. Good morning/afternoon students my name is Rosa Parks and I am here to speak to you about the importance of becoming involved in the civil rights movement

You walk into a cafe with a white friend. Everyone looks at you in disgust and hatred. White men are walking towards you and they don't look very happy. Whites were angered because you were sitting in the white table instead of the black .That could've cost your life. Good morning/afternoon students my name is Rosa Parks and I am here to speak to you about the importance of becoming involved in the civil rights movement and why you should stand up for what you believe in. African Americans fought for equality, against segregation and r****m for long periods of time. We have had enough. I and many other African Americans like you have suffered from this all our lives. We have to live in different areas from the whites, go to segregated schools, facilities and buses which are inferior to the whites. The Klu Klux Klan has murdered many of our loved ones and family. ...read more.

(abagond.wordpress.com/2009/05/29/the-clark-doll-experiment/). You shouldn't think of yourselves that way. Why should we be looked at as the bad and inferior one? Why should we be treated like this when we are all the same? People who would disagree with my position mostly whites would say that whites should play a minor role in helping minorities and blacks achieve their civil rights. Many whites have come to believe that African Americans have tolerated and sometimes have enjoyed our position as second-class citizens. They are completely wrong. We do not enjoy and put up with our positions as lower quality citizens. This is because they are white they don't care what others think unless we all take a stand. "The more we give in, the more we compiled with the kind of treatment, the more oppressive it became" Rosa Parks [www.rosaparksfacts.com/rosa-parks-civil-rights-movement.php] you have to take a stand for what you believe in. We should be able to live in America without people judging us everywhere we go. ...read more.

If no one took a stand and fight the law the movement would go nowhere. I was willing to go to jail to stand up for my rights to show people that we African Americans are sick and tired of the segregation in our country. I ask of you to do the same. We don't have to obey the law that we didn't take part in creating especially if the law was made to keep us where we are - inferior. We should all do something other than just sit around and watch the whites happily treat us badly. Us African Americans have fought for civil rights for a very long time and now is the time to end segregation. "Despite the violence and crime in our society, we should not let fear overwhelm us. We must remain strong." (http://www.grandtimes.com/rosa.html) I encourage you boys and girls to not stop trying to do the right thing if it even if it means breaking the law. We have to stop being uncomfortable of being African Americans. It is very important for you to be involved in the movement than to regret it later in the future. ...read more.