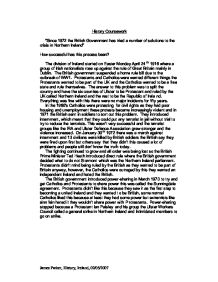 &quot;Since 1972 the British Government has tried a number of solutions to the crisis in Northern Ireland&quot; How successful has this process been?

History Coursework "Since 1972 the British Government has tried a number of solutions to the crisis in Northern Ireland" How successful has this process been? The division of Ireland started on Easter Monday April 24th 1916 where a group of Irish nationalists rose up against the rule of Great Britain mainly in Dublin. The British government suspended a home rule bill due to the outbreak of WW1. Protestants and Catholics were wanted different things the Protestants wanted to be part of the UK and the Catholics wanted to be a free state and rule themselves. ...read more.

They introduced internment, which meant that they could put any terrorist in jail without trial to try to reduce the terrorists. This wasn't very successful and the terrorist groups like the IRA and Ulster Defence Association grew stronger and the violence increased. On January 30th 1972 there was a march against internment and 13 civilians were killed by British soldiers the British say they were fired upon first but others say that they didn't this caused a lot of problems and people still don' know the truth today. ...read more.

The British government introduced power-sharing in March 1973 to try and get Catholics and Protestants to share power this was called the Sunningdale agreement. Protestants didn't like this because they saw it as the first step to becoming a united Ireland and they wanted to be British, some normal Catholics liked this because at least they had some power but extremists like sinn fein hated it they wouldn't share power with Protestants. Power-sharing stopped because a Protestant Ian Paisley and his group the Ulster Workers Council called a general strike in Northern Ireland and Intimidated members to go on strike. James Parker, History, Ireland, 02/05/2007 ...read more.