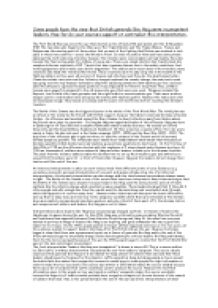 Some people have the view that British generals like Haig were incompetent leaders. How far do your sources support or contradict this interpretation?

﻿Some people have the view that British generals like Haig were incompetent leaders. How far do your sources support or contradict this interpretation. The First World War was a horrific war that started on the 28 July 1914 and lasted until the 11 November 1918. The two sides who fought in the War were The Triple Entente and The Triple Alliance. France and Belgium was the meeting point of these sides. And so most of the fighting that Britain was involved in took place in these two countries ? across the Western Front. In order to protect them and have some private planning time, both sides dug trenches; however the trenches were overcrowded, wet and muddy, they also became the final resting place for millions of young men. These once simple shelters had transformed into complex defensive systems by 1915. Trench-foot was a common disease due to the muddy conditions; feet turned gangrenous and in many cases led to amputation. The soldiers were never alone in the trenches; many creatures also made the trenches their home. These creatures were to play a big role in the health of the fighting soldiers as they were all carriers of disease and infections and they ate the dead human bodies. Creatures include rats, mice and lice. Infantry charged replaced the cavalry charge; the main tactic used was going ?over the top? however defenders swept the advancing attackers with machine gun fire, and even when the attackers captured forward positions it was impossible for them to keep them. Also, artillery became more powerful compared to the old inaccurate guns that were once used. Weapons included the Bayonet, Lee Enfield rifle, hand grenades and the eight bullets a second machine gun. Tanks were another weapon used to crush barbed wire and spray the enemy with machine gunfire. However the tanks were still not developed enough; they moved very slowly and they were not most broke before reaching the German?s trenches. ...read more.

Source B9 suggests that leaders like Haig fought their part of the war just as much as all the other soldiers, however all other evidence argues against this idea. Although leaders like Hag might not have fought the war physically, I think that the job of trying to come up with a good enough plan in order to win the battle and then instructing the men to do it would have been hard itself, and to be fair to leaders like Haig, the British people did eventually win the war ? just like Haig had promised. Source B11 suggests that the leaders like Haig were good leaders and that they could not be faulted. Source B15 is reliable because it is a photograph that clearly illustrates that leaders like Haig were not seen as the fault of the losses. Maybe this is due to the lack of evidence that was published at the time (against Haig) or people simply sympathised with Haig because with the decisions he was faced with. However the same cannot be said about source B13. In my opinion source B13 is unreliable because the provenance of source is untrustworthy. I can assume that Haig would obviously try to show himself as a good leader therefore anything he says could just be exaggerated and untrue. All of these sources help me understand that there were other factors that caused the vast number of deaths and the fault wasn?t only in the hands of leaders like Haig. It makes me think about the other factors that made war life difficult for the soldiers. For example, the rats and lice which carried disease around the trenches or the trench foot which disabled alot of soldiers from fighting. Other contributing factors could be the underage, inexperienced soldiers or the misuse of the new weaponry. I also think that this interpretation is valid based on the sources that I have evaluated because each source gives a reason as to why leaders like Haig were not incompetent. In complete conclusion, ...read more.