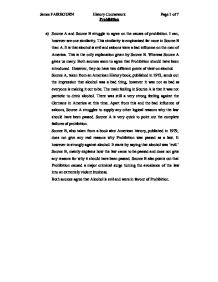 Source A and Source B struggle to agree on the causes of prohibition. I can, however see one similarity. This similarity is emphasised far more in Source B than A. It is that alcohol is evil and saloons were a bad influence on the men of America.

a) Source A and Source B struggle to agree on the causes of prohibition. I can, however see one similarity. This similarity is emphasised far more in Source B than A. It is that alcohol is evil and saloons were a bad influence on the men of America. This is the only explanation given by Source B. Whereas Source A gives us many. Both sources seem to agree that Prohibition should have been introduced. However, they do have two different points of view on alcohol. Source A, taken from an American History book, published in 1973, sends out the impression that alcohol was a bad thing, however it was not as bad as everyone is making it out to be. The main feeling in Source A is that it was not patriotic to drink alcohol. There was still a very strong feeling against the Germans in America at this time. Apart from this and the bad influence of saloons, Source A struggles to supply any other logical reasons why the law should have been passed. Source A is very quick to point out the complete failures of prohibition. Source B, also taken from a book abut American history, published in 1979, does not give any real reasons why Prohibition was passed as a law. ...read more.

In 1920 there were absolutely no drunk drivers. By 1923 there were 645 drunk drivers and by 1925 that figure had risen to 820. In 1925 there were 37,048 more, people arrested for being drunk, than in 1920. The only figure that has dropped was people arrested for drunk and disorderly conduct, which, however did rise between 1920 and 1923, but dropped by a couple of thousand in 1925. Overall, both Source G and Source H show the complete failure of prohibition. The authorities may have become more strict, however all the figures were supposed to fall, they have, however, on the whole, all risen. e) Source I goes along way to proving that Source J is telling the truth. Both Sources have the same messages. The whole system of Prohibition was corrupt. Source I is a picture of the leading authorities in Prohibition. It sums up how corrupt the whole system was. The people who were supposed to be insuring that the law was kept were actually making money out of it. Rather than arrest those who were breaking the law, they were taking bribes from them not to arrest them. This backs up what is said in Source J, by a policeman who is given money when he fails to enforce Prohibition. ...read more.

It is obvious that alcohol was being sold as people were arrested for being drunk. This was probably due to the large numbers of speakeasies, mentioned earlier. Sources I and J both say that Prohibition was a conspiracy. It was used for some of the country's authorities to make money. They were offered and took money not to arrest people for selling alcohol. Source I shows authorities, such as magistrates, politicians and prohibition officers with their hands held out behind their backs. I read this to be that they are holding out their hands for money, bribes. Source J is an account from a Chicago police officer, in 1920, who said that his senior officers were engaged in the massive conspiracy. When he raided a saloon, he said that if he had shut it down, then he would have been transferred to an area where there was little or no work. He also talks of how he was given $75, as a reward. This was said in 1920, which is right at the beginning of Prohibition. If this is happening at the start then how is going to be by the end? Overall, I feel that the Sources all contain some reasons why Prohibition was bound to fail. I feel that the main reason it was not going to work, was that the authorities were more interested in making money and accepting bribes rather than do their job. James FAIRBOURN History Coursework Page 1 of 7 Prohibition ...read more.