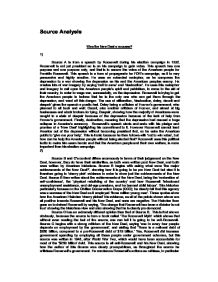 Source Analysis OCR: Was the New Deal a Success?

Source Analysis Was the New Deal a success? 1) Source A is from a speech by Roosevelt during his election campaign in 1932. Roosevelt is not yet president so is on his campaign to gain votes. This speech has one purpose and one purpose only, and that is to secure the votes of the American people for Franklin Roosevelt. This speech is a form of propaganda for FDR's campaign, as it is very persuasive and highly emotive. He uses an extended metaphor, as he compares the depression to a war showing the depression as his and the American peoples enemy. He creates lots of war imagery by saying 'call to arms' and 'destruction'. He uses this metaphor and imagery to call upon the American people's spirit and patriotism, to come to the aid of their country, in order to wage war, successfully, on the depression. Roosevelt is trying to get the American people to believe that he is the only one who can get them through the depression, and ward off this danger. The use of alliteration, 'destruction, delay, deceit and despair' gives the speech a poetic feel. Delay being a criticism of Hoover's government, who planned to sit back and wait. Deceit, also another criticism of Hoover, and aimed at big businesses and stock brokers for lying. Despair, showing how the majority of Americans were caught in a state of despair because of the depression because of the lack of help from Hoover's government. Finally, destruction, meaning that the depression had caused a huge collapse in America's economy. Roosevelt's speech starts and ends with his pledge and promise of a 'New Deal' highlighting his commitment to it. However Roosevelt cannot lead America out of the depression without becoming president first, so he asks the American public to 'give me your help'. This is ironic because he then follows with 'not to win votes', but how can he help the American people without being elected first? ...read more.

The song lyrics say 'No more breadlines we're glad to say', however in 1936, millions of Americans were still un-employed, and there were still a lot of government aid needed by the people of America. This is shown as Source D was written one year after this song, and Source D clearly shows a 'bread line'. Also this song could have been popular for the tune, not the lyrics, so in my opinion, it is also limited in showing public opinion of the New Deal, but, is more revealing than source H, as it was popular amongst all Americans, not just Roosevelt's supporters. 6) Source J is very against Roosevelt's New Deal. S.B. Fuller writes how it 'hurt us' and how Roosevelt 'thinks it is right to give' because 'everything was given to him'. The use of 'us' is a massive generalisation. The author of this source is clearly a 'full blown' capitalist as throughout the source he tells of how he believes no one should receive help but instead fight through it themselves in the hope that they might just come out stronger, and how the New Deal in particular made men too reliant on the government and took away their initiative. He also uses the example of a dog not hunting if food is given to it. This does not apply to domestic dogs however, and surely every member of a society is domesticated. The author of this source shows how he does not believe the New Deal is doing good for America, but how he believes that Hoovers, rugged individualism approach would be better for America. Source K is at the opposite end of the spectrum than that of Source J, and of its author, S.B. Fuller. The source tells of how FDR wanted to change the 'separate spheres' idea, and it is very much in favour of the New Deal, as it tells how 'the idea was that all the forces of the community should be directed to making life better for ordinary people'. ...read more.

The Supreme Courts job is to hold up the American constitution and make sure no laws passed by Congress are unconstitutional. Roosevelt was seen to violate this with two of his acts, the Nation Industrial Recovery Act and Agricultural Adjustment Act which both found to be unconstitutional showing how Roosevelt's methods were very much controversial. Huey Long was a professional politician who blamed Roosevelt for not doing enough for those in need and being too cautious and if it was for his assassination in 1935 might well have stood against him in the 1937 election. There are sources that show this disagreement over the New Deal. Sources B and C show the exact disagreement that was going to occur with such a pivotal event. Source B writes about the achievements of the New Deal, whilst Source C writes the complete opposite, that the New Deal caused massive National debt, and congress gave too much power to Roosevelt, and how Roosevelt was only saved by the outbreak of World War 2. Source D also demonstrates the disagreement caused by the New Deal, as it shows the view of Roosevelt not doing enough for blacks in American society, whilst the rich white family behind in the billboard are living the 'American Dream'. Also the cartoon sources show the controversy as each of them show good and bad points to the New Deal, how Roosevelt put a lot of effort in, but there were too many leaks, and how he tried a lot of remedies, but none seemed to have the desired affect and solve America's economic problems 100 percent. In conclusion the 'New Deal' was seen as one of the most pivotal events of America's modern history, and with such a big event, controversy is always going to follow. This is why in my opinion there was so much disagreement over the New Deal. Nobody could have helped everyone in the depression and help them in the most effective way, without effecting others, which was key to the 'share our wealth' scheme. ...read more.