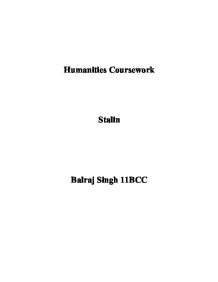 Humanities Coursework Stalin Balraj Singh 11BCC Does the Cartoonist Who Drew Source A Think Stalin is a Good Leader? Explain Your Answer Using Source A And Your Own Knowledge. Source A is a cartoon drawn by David Lowe and was published in the London Evening Standard on the 27th November 1930. David Lowe was a British illustrator who had no remorse for Stalin. As David Lowe lived in Britain, he was able to write negatively about Stalin and get away with it. Had he have done this cartoon in Russia, there would be no doubt that David Lowe would have been murdered. The cartoon shows Stalin standing in a prison with a gun set up to kill him if he pulls a string. The cartoon was drawn in the 1930's and in the bottom right corner says 'prophecies for the future'. Therefore, you get the idea that David Lowe has drawn what he expects to happen in the future. David Lowe has also written 'Old Low's almanac' in the bottom left corner. This adds humour, as people who viewed the cartoon would have heard of 'Old Mow's Almanac', a book released every year telling people of prophecies for the following year. 'Old Low's Almanac' is David Lowe's prophecies for the future and is also a play on words. As well as having Stalin in a prison cell with a contraption set up to kill himself, there are also two ministers dead in the corner. To add to that, there is also a group of 3 reporters, looking terrified as they report on what they are viewing. Behind the gun Stalin has set up, there is a stool with books on top and a statue of Karl Marx on top of them. The statue has been set up in such a way that it seems as though Marx is killing Stalin. Finally, there is a caption to the cartoon at the bottom of the picture in the centre. ...read more.

Source B is very biased, whereas source C gives a slightly more balanced approach. H Ward does not have any reason to lie or hide the truth, as she will not face any repercussions. A difference between the two sources is that source B gives a positive view of Stalin's policies (the 5 year plan) whereas source C tries to give a more balanced view of Stalin's policies. A reason for the difference is that Dr Hewlett Johnson, the author of Source B had limited resources and as a result of this was unable to give the full story. However H Ward knows what happened and can give a balanced account as a result of this. To add to that, it could also have been due to circumstances. Dr Hewlett Johnson agreed with Stalins idea of communism and was going to be in favour of Stalin as a result of it, where as this is not likely with H Ward. Another difference is the fact that source b does not mention Stalin, whereas source c does not mention him. A reason for this could be due to the repercussions Dr Hewlett Johnson may face if he published Stalins name. Also, Stalin may have used censorship to get his name out of the article. Source C uses his name, as the author will not face any repercussions and can write what she wants without having to worry about any censorship issues. Another difference is that source B is a primary source and source C is a secondary source. Therefore, the author of source B would receive limited information, where as the author of source C can write looking in hindsight. Finally, to conclude and referring back to the essay title, I believe the interpretation of events is different as the author of Source c had more information to work with compared to the author of source B. ...read more.

Source D also disagrees with the statement in the question as it shows that people are happy to see Stalin and they have welcomed him. It also shows that they respect Stalin for his collectivisation policy. Source G suggests that Stalin has improved everything regarding the USSR. From food to technology, everything has improved and has been improved in a very short period of time. Source G believe that Stalins policies worked and were very successful. This interpretation is supported with examples from my own knowledge. The diagrams in the 'Socialism in One Country' booklet show a rapid improvement in the production of essential materials such as iron and steel. As there is a lot more of these metals available, more weapons can be made to backlash German troops. During World War 1, Russia had to surrender to Germany. They were very embarrassed of what had happened and so during World War 2, they put up a stronger fight as they were determined not to fail again. Finally, John Scott liked the policies when he first arrived in USSR and he went there as he felt it was a society a step ahead of his own. Before immigrating to USSR, John Scott lived in America, were the great depression was occurring. So, to conclude I believe Stalin was an evil dictator but he did help USSR. I believe this because he did kill millions of people, but he achieved the target which he had set out to achieve. Stalin wanted the USSR to catch up with the capitalist world and become the dominant force it once was. Stalin killed many people through collectivisation, but he did also increase the amounts of essential materials produced such as coal and oil. Overall, I believe that Stalin was an evil dictator who had a one track mind and killed anyone who got in his way. Therefore I agree with the statement in the question in a sense, because Stalin was an evil dictator, but he did actually improve the USSR. ?? ?? ?? ?? Balraj Singh - 13 - ...read more.