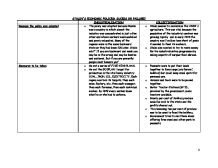 Stalin and the War

STALIN�S ECONOMIC POLICES: SUCESS OR FAILURE? INDUSTRIALISATION COLLECTIVISATION Reasons the policy was adopted o The policy was adopted because Russia was a country in which almost the industry was concentrated in just a few cities and whose workers were unskilled and poorly educated. Many of the regions were in the same backward state as they had been 100 later. Stalin said:" If you are backward and weak you may be in the wrong and may be beaten and enslaved. But if you are powerful people must beware you" o Stalin needed to modernize the USSR�s agriculture. This was vital because the population of the industrial centres was growing rapidly and in early 1928 the country was 2 million tons short of grain it needed to feed its workers. o Stalin also wanted to try to raise money for his industrialisation programme by selling exports of surplus food abroad. Measures to be taken o He set a series of FIVE-YEAR PLANS. o He set the GOSPLAN: target for production in the vital heavy industry: COAL, IRON, OIL, ELECTRICITY. ...read more.

o Collectivisation also meant the introduction of machines into countryside. o Two million peasants leant how to drive a tractor. o New methods of farming were taught by agricultural experts. o The countryside was transformed. o By 1934 there were no kulaks ( prosperous peasants who owned small farms) o By 1941 almost all the agricultural land was organized under the collective system. o Stalin had achieved his aim of collectivization. o Stalin said that collectivization had been a success. Failures of the policy o Life was harsh. Factory discipline was strict and punishments were severe. o TO prevent workers from moving to other jobs the secret police introduce internal passports which prevented free movement of workers inside the USSR . o Concentration on heavy industry meant that there were few consumer goods ( such as clothes or radios) which ordinary people wanted to buy. o Stalin was asking peasants to abandon a way of life that they and their ancestors had led for centuries. ...read more.

To achieve this, the workers, the peasants, the owners of farms, that�s to say the low classes, suffered , they were the ones who died while building big canals or railway, they were the ones who suffered famine, they were the ones who lived in inhuman conditions sharing crowded rooms , they where the ones who had to give the government their small farms and their production. We think that in a way it was a slavery system, they couldn�t have their own property or choosing their own job. People could not be free, and if they dare to think differently and say so, if they tried to change job, they received severe punishment. From the point of view of Stalin, both polices were a success, because Russia became the powerful country he wanted it to be, but the human cost was high. The measures taken to achieve the aims were not the proper ones, because the centre of those polices should have been the human being. Stalin didn�t mind about the human being, he didn�t mind about the human sacrifices , the human suffering and the human lost to achieve his aims. ?? ?? ?? ?? 1 ...read more.