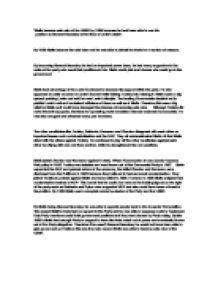 Stalin became sole ruler of the USSR by 1928 because he had been able to use his position as General Secretary at the time of Lenins death.

'Stalin became sole ruler of the USSR by 1928 because he had been able to use his position as General Secretary at the time of Lenin's death'. By 1928 Stalin became the sole ruler and he was able to defeat his rivals for a number of reasons. By becoming General Secretary he had an important power base, he had many supporters in the ranks of the party who owed their positions to him. Stalin could pick and choose who could go in the government. Stalin took advantage of the Lenin Enrolment to increase his support within the party. He also appeared as chief mourner at Lenin's funeral while tricking Trotsky into missing it. ...read more.

He was also arrogant and offended many part members. The other candidates like Trotsky, Bukharin, Kamenev and Zinoviev disagreed with each other on important issues such as industrialisation and the NEP. They all underestimated Stalin. At first Stalin sided with the others against Trotsky. He continued to play off the other candidates against each other by allying with one and then another, while he strengthened his own positions. Stalin joined Zinoviev and Kamenev against Trotsky. Where 'Communism in one country' became Part policy in 1925. Trotsky was isolated and was thrown out of the Communist Party in 1927. ...read more.

By 1928 Stalin was in complete control as leader of the Party and the USSR By Stalin being General Secretary he was able to appoint people loyal to him to senior Part position. This meant Stalin's rivals had no support in the Party and he was able to suppress Lenin's Testament. Only Party members could hold government positions and they were chosen by Party voting. By late 1920's Stalin had enough Party to support to have his rivals voted out of power and eventually thrown out of the Party altogether. Therefore if he wasn't General Secretary he would not have been able to gain power and so I believe this was the main reason Stalin was able to become sole ruler of the USSR. ...read more.