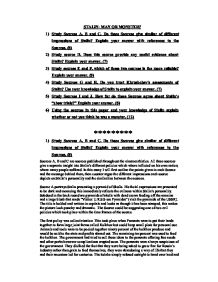 This statement was partly true, as if he didn't take this stand, quoted as being a "mad deposit", then Stalin wouldn't of introduced policies such as industrialisation, where it was an advantage to the "party and the working masses". Even his policies such collectivisation which where initially regarded as awful where introduced not to terrorise peasants but to end forced exploitation of peasants by greedy landlords and get rid of the greedy and troublesome Kulaks. It helped peasants work together and provided large scale organisation of food production for the farms where perks and other offerings where offered. However, there were darker sides to those policies, such as collectivisation which was forced and the Kulaks were scapegoats for inefficient food production. The policy led to the murder and deportation of millions of people to prisons and labour camps, this resulted with kulaks destroying crops and animals caused by famine killing more people. Also industrialisation and other severe problems such as the five year plans, here industrial zones were set up provided workers with very poor housing and amnesties. Long hours were worked for low pay, most of the targets where unrealistic and much of the work was done by the inmates of forced labour camps, criminals and political prisoners. Source H portrays Khrushchev portraying Stalin as a "distrustful man" and very a "suspicious" person. This is true as it is also reflected in his policies well known for killing millions of peoples such as the purges, where millions where taken to gulags and sentenced to death because of suspicion this "general distrust" he saw in people was why he began to purge people after the death of Kirov. Loyal Bolsheviks such as Bukharin and Kamenev were sent to the gulags and killed because of suspicion that they where being traitors of state. The gulags were a place of torture where inmates would eventually "confess" to anything. ...read more.

However, it is significant for me to analyse sources produced by both communist and capitalist nations as it will increase my insight into their ideologies. After discussing the various views of whether Stalin was a man or monster I have reached a decision where I believe he is neither. Some would think that it would be out of balance to call Stalin a blood thirsty monster, as the slaughtering of people in his mind was because he was consciously convinced what he was doing the best for his country. As he also introduced the five year plans where it was an advantage to the Soviet Union as a whole and his policy of collectivisation was in essence bringing together the unity of people together. Yet at the same time the methods he implemented this was in vile and vicious way. In addition to this, he was corrupt giving party "apparatchiks" the easy way out. However calling Stalin a monster would indicate that he done no good to his country and was a person who slaughtered people for fun thus I believe that Stalin is a man deluded and paranoid because of the people he was surrounded by influenced in the childhood he grew up in. Thus I would agree to source M which in my opinion the most accurate and fairest source in the paper as it portrays both the good and the bad Stalin has done and the "darker side" to his personality. Even though the source was published by the allies the fact it was published five years before the collapse of communism has made the editor become more neutral giving more justice to Stalin rather then the exaggerated accounts of Stalin being a beast or an idol. Concluding this essay I believe that Stalin was neither a man nor a monster. Comparing Stalin to dictators like Hitler and Mussolini all these three leaders had a common theme between each other. Each leader was surrounded by paranoia of creating a perfect world where their enemies didn't exist. A dream neither of them could fulfill. ...read more.