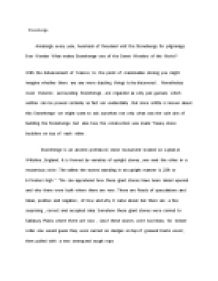 ﻿Stonehenge Amazingly every year, hundreds of thousand visit the Stonehenge for pilgrimage. Ever Wonder What makes Stonehenge one of the Seven Wonders of the World ? With the Advancement of Science to the point of mammalian cloning you might imagine whether there are any more dazzling things to be discovered . Nonetheless most theories surrounding Stonehenge , are regarded as only just guesses which neither can be proved certainly as fact nor evidentially . But since a little is known about this Stonehenge we might want to ask ourselves not only what was the sole aim of building the Stonehenge but also how the construction was made ?heavy stone boulders on top of each other . Stonehenge is an ancient prehistoric stone monument located on a plain in Wiltshire , England . It is formed by varieties of upright stones , one next the other in a mysterious circle .The tallest the stones standing in an upright manner is 22ft or 6.7meters high ?. ...read more.

Also some believe it might have been used to record the time by the inhabitant Druids. I will discuss on the speculation that the Stonehenge might have been a celestial observatory predicting solstices , equinoxes , and eclipses for worshipping of gods . Longtime ago little was none of why eclipses happen , the ancient people might have thought it was a sign from their gods . On the event of an eclipse , it must have been very special that those inhabitants and hence builders were bewildered by the sight of this supposed holy event that seem to occur four years periodically , so probably it was built to be a model for predicting an eclipse so the gods can be worshipped by the people . Under this thought of the Stonehenge being an celestial observatory tool , it could have been a way of predicting full moons . ...read more.

Due to the many possibilities of the Stonehenge it baffles the mind . You would ask yourself whether the people of those ancient days were so smart that the they could forecast and envision eclipse or may be they were some religious sect that make sacrifices to their gods and thus built Stonehenge for temple . ? What was the purpose of Stonehenge ?? Well the question is left for you to answer depending on the way you want to view history since little is known about the culture of ancient days . I would conclude that the Stonehenge was built to foretell eclipse and may be eclipse was some sign from their gods . Stonehenge is an interesting mystery in the world because you could up with various answers of the purpose of the building which might perhaps be right . This picture show a prediction of how the Stonehenge might have been built , how the stones were transported . ...read more.