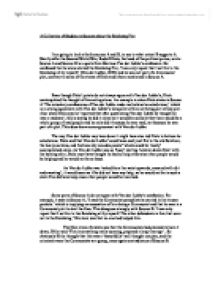 Studies of Sources from the Reichstag Fire - who was responsible?

A Collection of Studies on Sources about the Reichstag Fire I am going to look at both sources A and B, to see to what extent B supports A. Shortly after the Second World War, Rudolf Diels, the head of the political police, wrote Source A and Source B is a quote from Marinus Van der Lubbe's confession. He confessed that he alone started the Reichstag Fire, 'I can only repeat that I set fire to the Reichstag all by myself,' (Van der Lubbe, 1933) and he was not part of a Communist plot, contrary to some of the views of Diels and others mentioned in Source A. Even though Diels' points do not always agree with Van der Lubbe's, Diels contemplated the thought of him acting alone. An example is when Diels states in Source A 'The voluntary confessions of Van der Lubbe made me believe he acted alone,' which is in strong agreement with Van der Lubbe's viewpoint of him not being part of any plot. Also when Diels says he 'reported that after questioning Van der Lubbe he thought he was a madman', this is saying he did it alone as it would be unlikely that there would be a whole group of mad people and he only did it because he was mad; not because he was part of a plot. This does show some agreement with Van der Lubbe The way Van der Lubbe may have done it might have also led Diels to believe he acted alone. Diels said that Van der Lubbe 'could have easily set fire to the old furniture, the heavy curtains, and the bone dry wooden panels" which could be 'easily' accomplished alone. As Van der Lubbe was so 'busy' starting 'several dozen fires' with his burning shirt, Diels must have thought he had no help otherwise other people would be helping and he would not be so busy. ...read more.

I am going to look at sources F, G and H to see whether F and H prove that Goering was telling lies in his trial in Nuremburg. Source F is part of the evidence from General Franz Halder's trial, G, from Goering's trial, and H is an extract from a book published by the Communists about the 'confession' of Karl Ernst, a leader of the SA in 1934. Both sources F and H agree with each other in saying Goering started the fire, contrary to Source G which says he did not. I will be using this and evaluating the sources for reliability to see if F and H prove that G is lying. Source F, which was evidence from Halder's trial in 1946, may be unreliable because of who and when he gave it. As a Nazi on trial, Halder would have tried to blame someone else to avoid punishment from the allies he was being tried against. And since he had nothing to lose, as he was already in trouble, it would not matter if he lied because he would most likely get punished severely if he did confess it was him. Therefore he had a much stronger motivation to lie thus making this a less reliable source. Halder gave this evidence in order to prove his innocence to the allies at Nuremburg, so he would not get punished, but this means he could lie or exaggerate. Halder states that 'Goering broke into the conversation and shouted: The only one who really knows about the Reichstag building is I, for I set fire to it.' so he is blaming Goering. Since the Nazis had lost the war, Halder was trying to get out of the blame so could lie easily because the Nazis had split and could do nothing to him if he accused one of them. Goering may have seemed like a realistic person to accuse to Halder since he used the fire to blame the Communists possibly making this unreliable. ...read more.

His statement may not be completely reliable because, like Source F, his main aim is to prove his innocence and he would be punished most likely if he didn't lie, so his motive would be much stronger so this does make you think that the Nazis may have started it so it slightly supports the interpretation. Some sources imply that the Nazis gained from the fire. Source J shows that the Nazis gained power from it: 'This provided legal warrant for the Gestapo to imprison without trial'. As the Nazis did gain from this, it makes you think that perhaps they started the fire so they would get these gains. This was written by a historian long after the Reichstag so may be altered and therefore not as reliable as it could be. Source K is a picture of Hitler and Hindenburg in very leadership poses which also shows that the Nazis would have gained power and Hitler, dictatorship. 'This is a heaven sent opportunity my lad. If you can't be a dictator now, you never will be', which shows that the Reichstag fire was a chance for him to become a powerful leader so there would be more motive for the Nazis to start it themselves. However, this is a British cartoon trying to be funny and persuasive which is anti-Nazi so would probably be bending the truth to make people believe the same thing so not as reliable. In conclusion, I think that the interpretation that is supported most by the sources is that the Reichstag fire was started by the Nazis. As most sources do suggest that it was, and how they would have gained from it, makes me think that they did do it purposely in order to gain power and used the Communist plot idea to cover it up, which is where the Communist accusation came from. Even though a lot of sources that do agree with this interpretation are not completely reliable, I still think this as the evidence of first-hand accounts outweighs this. ...read more.