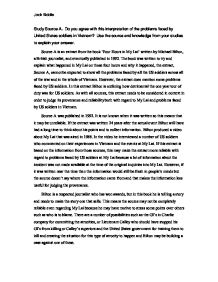 Study Source A. Do you agree with this interpretation of the problems faced by United States soldiers in Vietnam? Use the source and knowledge from your studies to explain your answer.

Study Source A.  Do you agree with this interpretation of the problems faced by United States soldiers in Vietnam?  Use the source and knowledge from your studies to explain your answer.

Source A is an extract from the book ‘Four Hours in My Lai’ written by Michael Bilton, a British journalist, and eventually published in 1992. The book was written to try and explain what happened in My Lai on those four hours and why it happened, the extract, Source A, cannot be expected to show all the problems faced by all the US soldiers across all of the war and in the whole of Vietnam. However, the extract does mention some problems faced by US soldiers. In this extract Bilton is outlining how detrimental the one year tour of duty was for US soldiers. As with all sources, this extract needs to be considered in context in order to judge its provenance and reliability both with regard to My Lai and problems faced by US soldiers in Vietnam.

Source A was published in 1992. It is not known when it was written so this means that it may be unreliable. If the extract was written 24 years after the actual event Bilton will have had a long time to think about his points and to collect information. Bilton produced a video about My Lai that was aired in 1988. In the video he interviewed a number of US soldiers who commented on their experiences in Vietnam and the events at My Lai. If this extract is based on the information from those sources, this may make the extract more reliable with regard to problems faced by US soldiers at My Lai because a lot of information about the incident was not made available at the time of the original inquiries into My Lai. However, if it was written near the time then the information would still be fresh in people’s minds but the source doesn’t say where the information came from and that makes the information less useful for judging the provenance.

Bilton is a respected journalist who has won awards, but in this book he is telling a story and needs to make the story one that sells. This means the source may not be completely reliable even regarding My Lai because he may have motive to stress some points over others such as who is to blame. There are a number of possibilities such as the GI’s in Charlie company for committing the atrocities, or Lieutenant Calley who should have stopped his GI’s from killing or Calley’s superiors and the United States government for training them to kill and creating the situation for this type of atrocity to happen and Bilton may be building a case against one of these.

Bilton may have been biased, as he was writing about an atrocity, when he interviewed soldiers he may have felt they were victims. I think Bilton chose to mention the low IQ scores, the short tour of duty, and early deaths because the low IQ scores makes them seem unable to argue, the short tour of duty shows them to be inexperienced and not aware of what could happen, the early deaths show the soldiers as frightened. So he may have chosen to mention these things because they suggest the ordinary soldiers are victims who couldn’t fight effectively in the war. He was also trying to show how it was the American government’s fault; they let this happen.

The incident at My Lai happened on the 16th March 1968 which is about halfway through the Vietnam War. In the extract Bilton has made several points that could be faced by all US soldiers, but these are general statements, aren’t supported by the statistics to show how true these claims are. Bilton uses these points in  relation to My Lai because showing how inexperienced and possibly lacking intelligence the troops are suggests why they may have not known what to expect when they went into My Lai and why they may have been led into the massacre of civilians. Source A probably is reliable with regard to My Lai. Having watched Bilton’s video I agree that these probably are the most important problems faced by the soldiers at My Lai.

Bilton says One of the problems faced by US soldiers in Vietnam was that “An increasing number of recruits scored so low on the intelligence tests that they would never have been let into the normal peacetime army.” This quotation says a ‘rising number’ but it doesn’t mean a majority so there will be some that are well educated. The draft meant that soldiers were from all types of backgrounds in America. The more intelligent soldiers often were behind at base, in fact some even managed to get their conscription delayed or served their time in America. Therefore, the front line troops Bilton spoke to were more likely to be the poor, the black, and the less educated conscripts. This appeared to be the case on Bilton’s video about My Lai.

Because it appears first in the extract, lack of intelligence appears as a major cause of problems for US soldiers but the one year tour of duty was the experience of most US soldiers and may have been the main reason. It is said that “America didn’t fight a ten year war but a one year war ten times”. The one year tour of duty was designed to keep up morale as it is a fairly short tour of duty. This it had unexpected consequences and meant that inexperienced troops died unnecessarily, and it reduced the efficiency of the United States army significantly. The extract mentions that the majority of deaths of US soldiers were in the early months of the tour of duty and this supported by the statistics. Lack of experience meant that 43% of US soldier deaths in Vietnam occurred in the first 3 months. 51% of US deaths occurred in the months 3 to 5. Only 6% of deaths occurred in last 3 months when soldiers had become experienced. However this is not the whole picture.

Many non-commissioned officers did more than one tour of duty. These officers would share experience with the men, and the GIs had had some combat training before coming to Vietnam, so they were not completely unprepared but there is some truth that, “As a soldier began gaining experience he was sent home” because most soldiers would only do one tour of duty. Therefore it is partly true that this was a ‘rookie army’ of inexperienced men as the extract says but because the extract only compares the experience of the fighters, this is a simple statement about a more complicated situation.

The V.C had fought the Japanese and the French before the Americans so as an army they were experienced particularly in guerrilla warfare and in familiar territory; however some Vietcong would be inexperienced. 70% of the US soldiers were conscripts which meant that they probably didn’t want to be there, they will have had a lack of motivation. Whereas the V.C were defending their country and their families so will be very motivated. The V.C had hidden stores of equipment in the jungle so they didn’t have to carry it. The United States soldiers had to carry all their equipment. They were also not used to the conditions in the jungle. The constant fear of booby traps in the jungle scared a lot of soldiers, 11% of United States deaths were due to them. In the extract Bilson fails to mention any of these problems. So Source A is only reasonably useful for explaining the problems faced by United States troops.

It would be useful if Bilton had given some statistics so that a reader could judge what his argument was based on. This source is only an extract and the information may be elsewhere in the book. The source is only presenting one side of the argument as he doesn’t mention anything about America having almost limit less money, heavier firepower and the ability to use airstrikes. In the extract it says “The large majority of deaths took place in the first six months”. I know that roughly 70% of deaths of US soldiers occurred in the first 6months so this point suggests the source may be reliable on that point. The extract does not mention who Bilton interviewed but if he only interviewed soldiers from My Lai, he would only know problems faced by those soldiers at that time. These problems aren’t necessarily representative of all soldiers in all of Vietnam, across the whole of the war.

Bilton does not mention aspects such as if the training of the soldiers was adequate, the racism of many of the soldiers who called the Vietnamese ‘gooks’ and ‘dinks’, or the promotion of officers depending on the body count which meant enemy and civilians were often killed together.

In conclusion, this source is a general statement. Some points like the tour of duty and the death rate are supported by the statistics of the war and can be agreed with as facts. However, the source only points out very few of the problems faced by US soldiers in Vietnam and does not put them in context. The book may do this. Overall, this is not useful as a reliable source on its own.

It is not reliable or useful with regard to the problems faced by all US soldiers in all of Vietnam from 1963 to 1975 but from the title of the book I can tell that it was not Bilton’s aim to identify or explain all the problems and this is only a short extract from that book. It also has a lot of omissions; if Bilton included these things then it would make it more useful. I agree with Bilton’s interpretation many US soldiers died early on in their tour of duty and they were inexperienced due to a short tour of duty. This is supported by the facts and from my own knowledge I know this to have been important in influencing US soldiers and their morale and effectiveness in the war. The falling IQ score may be true but it is not clear that this was a problem for US soldiers in Vietnam and influenced the war.  However, the interpretation by Bilton is incomplete. It does not provide the data to support its claims and it only identifies a very small number of problems. The most important reason that this doesn’t show all the problems faced by United States soldiers in Vietnam is because it does not set out to do so.