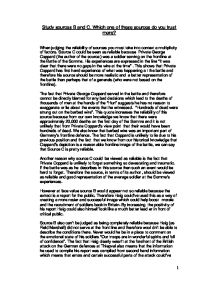 Study sources B and C. Which one of these sources do you trust more?

Study sources B and C. Which one of these sources do you trust more? When judging the reliability of sources you must take into context a multiplicity of factors. Source C could be seen as reliable because Private George Coppard (the author of the source) was a soldier serving on the frontline at the Battle of the Somme. His experiences are expressed in the line "It was clear that there were no gaps in the wire at the time". This shows that Private Coppard has first hand experience of what was happening at the battle and therefore his source should be more realistic and a better representation of the battle than perhaps that of a generals (who were not based on the frontline). The fact that Private George Coppard served in the battle and therefore cannot be directly blamed for any bad decisions which lead to the deaths of thousands of men at the hands of the "Hun" suggests he has no reason to exaggerate or lie about the events that he witnessed. "Hundreds of dead were strung out on the barbed wire". This quote increases the reliability of this source because from our own knowledge we know that there were approximately 20,000 deaths on the first day of the Somme and it is not unlikely that from Private Coppard's view point that their would have been hundreds of dead. ...read more.

This shows as we know the casualties and deaths in the first couple of days in the battle of the Somme tolled at a level too high for the battle to be remotely described as "clockwork". Despite this evidence for illegitimacy of source B we must also take into consideration the evidence to suggest it should be trusted. One such argument is that Haig (as the field marshal) would've had been expected to have a good overview of the battle and would have been watching the developments intensively. With an overview of the battle he should have had a better picture of the battle as a whole rather than just the single section as described in Private George Coppard's interview. Furthermore, as Field Marshal, Haig would've been receiving information from lots of different sources meaning that the space error in the accuracy of their reports would have been much smaller. Clearly from Haig's report the battle couldn't have been a complete bloodbath as described in Source C as he includes the line "The battle is going very well". As with source B there is also good reason to doubt the reliability of source C. One reason why source C could be judged as unreliable is because its author (Private George Coppard) ...read more.

Source C can also be compared to source G. Source G makes source C seem much more reliable because it confirms that there were "heavy losses" and also says "a great number of young soldiers whose training was poor" which could explain why the number of strewn dead on the "barbed wire" were so high in numbers. Source J also cross-refers quite satisfactorily with source C. It suggests that Haig's tactics lead to multiple dead, "I expressed my doubts", and that the battle front described by Private Coppard also ties in with Lloyd George recount "a front bristling for miles with barbed wire and machine guns". The memoirs written by Lloyd George also suggest that the death toll was a lot greater for the British than the Germans which ties in with both my own knowledge and source B "It killed off far more of our best". Taking into consideration both the reasoning behind the reliability and unreliability and the cross-referencing of both sources I think that source C should be judged as the most reliable of the pair. I think this because not only do we know from our own historical knowledge that the British encountered extremely heavy losses at the battle of the Somme but it also cross-refers better with the other two chosen sources. Therefore I trust source C more than source B. ?? ?? ?? ?? 1 ...read more.