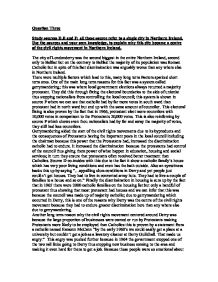 Question Three Study sources D,E and F; all these source refer to a single city in Northern Ireland. Use the sources and your own knowledge, to explain why this city became a centre of the civil rights movement in Northern Ireland. The city of Londonderry was the second biggest in the entire Northern Ireland, second only to Belfast but on the contrary to Belfast the majority of its population was Roman Catholic but in spite of this fact discrimination was arguably worse than any where else in Northern Ireland. There were multiple factors which lead to this, many long term Factors sparked short term ones. One of the main long term reasons for this fact was a system called gerrymandering; this was where local government elections always returned a majority protestant. They did this through fixing the electoral boundaries to the side of unionist thus stopping nationalists from controlling the local council; this system is shown in source F where we can see that catholic had by far more votes in south ward than protestant had in north ward but end up with the same amount of councilor. ...read more.

Another long term reason why the civil rights movement centered around Derry was because the large proportion of businesses were owned or run by Protestants making Protestants more likely to be employed than Catholics this is proven by a statement from a catholic named Eamonn McCann "by the early 1960's we could easily get a place at a university but couldn't get a job as a lavatory cleaner at Derry Guildhall. That made us angry." This angry was pushed further because in 1964 the government stopped one of the two rail links going to Derry thus stopping new business coming to the area and making it even hard for them to get a job. Because these people were so emotional about this treatment it sparked many other short term reasons why the civil rights movement evolved in Derry. One of these short term reasons was that in October 1968, the was a march arranged by a group called NICRA, the March progress through a predominantly protestant area of Derry, this march was then prohibited under the Special powers Act, this was seemingly ignored because the march continued in spite of this and this led to the police trying to disperse the protestors with water cannon and baton charge. ...read more.

Thirteen people were found dead after the incident with may others left injured. With neither side accepting blame for the incident Catholics in Derry believed protestant were behind it, this provoked great anger from the catholic community in Derry. And inspired more Catholics to fight for there right in Derry and this then spread across Northern Ireland. On refection I believe that it was because there was a greater proportion of Catholics in comparison to protestant there was an issue in Derry. Since this lead to electoral fixing, this didn't occur in the majority of the rest of Northern Ireland due to the fact the rest of Northern Ireland was the opposite to Derry. They had more Protestants in comparison to Catholics. This meant that Catholics had to endure more maltreatment because they were discriminated in the same ways in which the rest of Northern Ireland was but also in Government and if this wasn't the fact they wouldn't have had to endure any discrimination. This angered the people of Derry and made them do something about it e.g. marches which influenced more people to fight for their rights and thus the movements grow in Derry and progressing across Northern Ireland. ...read more.