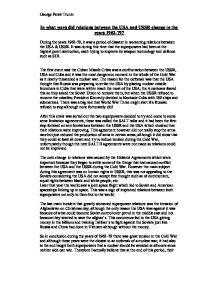 In what ways did relations between the USA and USSR change in the years 1962-79?

During the years 1962-79, it was a period of disaster in worsening relations between the USA & USSR. It was during this time that the superpowers had been at the highest point destruction, each trying to improve its weapon technology and defence such as SDI.

The first event was the Cuban Missile Crisis was a confrontation between the USSR, USA and Cuba and it was the most dangerous moment in the whole of the Cold War as it nearly threatened a nuclear war. The reason for the outbreak was that the USA thought that Russia was preparing to strike the USA by placing nuclear missile launchers in Cuba that were within reach the most of the USA; the Americans feared this so they asked the Soviet Union to remove them, but when the USSR refused to remove the missiles; President Kennedy decided to blockade Cuba with 180 ships and submarines. There was a big risk that World War Three might start if a Russian refused to stop although none fortunately did!

After this crisis was sorted out the two superpowers decided to try and come to some arms limitation agreements, these was called the SALT talks and it had been the first step forward on arm limitations between the USSR and the USA which showed that their relations were improving. This agreement however did not really stop the arms race but just reduced the production of arms in certain areas, although it did show that they could at least sit down and try to reduce tension during the Cold War, unfortunately though the next SALT II agreements were not made so relations could not be improved.

The next change in relations was caused by the Helsinki Agreements which were important because they began to settle some of the things that had caused conflict between the USA and the USSR during the Cold War. However the main subject during this agreement was on human rights in USSR, this was not appealing to the Soviets considering the USA did not accept free thought such as of communism, equal rights between black and white people, etc.

Later that year the world saw a joint space flight which led to Soviet and American spaceships linking up in space. This was a sign of improved relations between both superpowers not only to them but to the world.

The last main incident that greatly worsened superpower relations was the invasion of Afghanistan on Christmas day, although the only reason the USA was against it was because of what could become Soviet control over petrol in the middle east and not because they wanted to save the afghan’s. This occurrence led to the USA giving money in the billions and training Taliban’s to fight against the Soviets just like Russia and China had done in Vietnam although without the money.

So in conclusion during the years of 1962-79 there was great tension in the Cold War and although these years were the closest to an outbreak of a nuclear war, it had also at the end taught both superpowers that a nuclear should be avoided at all costs since neither side can win. Therefore I actually believe that at the end of this period, their relations improved in the sense that they were sure nuclear war was not going to happen.