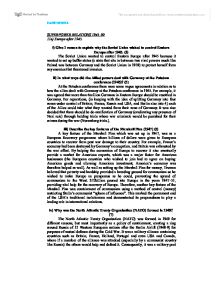 SUPERPOWER RELATIONS 1945-90 11a) Europe after 1945. i) Give 1 reason to explain why the Soviet Union wished to control Eastern Europe after 1945. (3) The Soviet Union wanted to control Eastern Europe after 1945 because it wanted to set up buffer states (a state that sits in between two rival powers much like Poland was between Germany and the Soviet Union in 1939) to protect herself from any enemies that threatened invasion. ii) In what ways did the Allied powers deal with Germany at the Potsdam conference (1945)? (5) At the Potsdam conference there were some vague agreements in relation as to how the allies dealt with Germany at the Potsdam conference in 1945. For example, it was agreed that more than 6million Germans in Eastern Europe should be resettled in Germany. For reparations, (in keeping with the idea of splitting Germany into four zones under control of Britain, France, Russia and USA, and Berlin also into 4) each of the Allies could take what they wanted from their zone of Germany. It was also decided that there should be de-nazification of Germany (eradicating any presence of Nazi rule) ...read more.

This was its own alliance which contained the communist countries of Eastern Europe (not Yugoslavia). As a result, it divided Europe into two armed camps. 11b) Cold War and d�tente in the years 1961-90. i) Choose two of either 1961: Berlin Wall, 1962:Cuban Missile Crisis, 1969-72:SALT 1 and describe how each contributed to the development of the Cold War. (10) The building of the Berlin Wall in 1961 contributed to the development of the Cold War as it increased tension between the superpowers for another 27 years until it was brought down in 1989. It was the most symbolic object of the Cold War. Throughout, it was at the heart of the conflict and continued to be a potential flashpoint for war between NATO and the Warsaw Pact. It was built to divide East Berlin from West Berlin, which was part of the Iron Curtain, the phrase that was coined by Winston Churchill much earlier on in 1946, to resemble the divide between East and Western Europe. When the wall was in the early stages of being built, for several days Soviet and American tanks faced each other across divided Berlin streets, resembling the development of the Cold War as it is clear to see that there is increased tension here. ...read more.

(defence spending accounted for more than 1/3 of the federal governments budget.) However, in Reagan's second term, he built a constructive relationship with Gorbachev (1985-90) showing signs that relations were changing positively between the superpowers and lead to the Strategic Arms Limitation Treaties. He was aided by Gorbachev's willingness to improve relations with the USA. Gorbachev realised that USSR couldn't afford to have an arms race with America and accepted Reagan's invitation to meet him in Geneva in November 1985. In 1987, after several meetings they signed the Intermediate Nuclear Forces Treaty which removed all medium-range nuclear weapons from Europe. They key figure in this period is Gorbachev as he knew that the USSR needed to be reformed so by doing so, he more or less ended the Cold War as well by improving relations and aided friendly talks. Consequently, I can see that between 1979- 1985 relations were very poor with little communication due to incidents such as the invasion of Afghanistan. Yet, between 1985 and 1990, relations were the best they had been due to incidents such as the leadership of Gorbachev and the signing of the Intermediate Nuclear Forces Treaty. ?? ?? ?? ?? KATIE NEWELL ...read more.