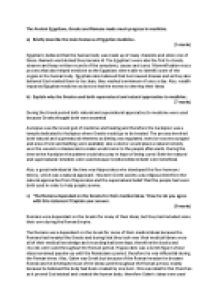 The Ancient Egyptians, Greeks and Romans made much progress in medicine.

Transfer-Encoding: chunked ﻿The Ancient Egyptians, Greeks and Romans made much progress in medicine. 1. Briefly describe the main features of Egyptian medicine. [5 marks] Egyptian?s believed that the human body was made up of many channels and when one of these channels was blocked they became ill. The Egyptian?s were also the first to closely observe and keep written records of the symptoms, causes and cures. Mummification was a process that also helped medicine as the Egyptians where able to identify some of the organs in the human body. Egyptians also believed that God caused disease and as they also believed God wanted them to be clean, they washed a minimum of once a day. ...read more.

Also, a great individual at the time was Hippocrates who developed the four humours theory, which was a natural approach. However Greek society was religious therefore the natural approaches from Hippocrates and the supernatural belief that the people had were both used in order to help people survive. 1. ?The Romans depended on the Greeks for their medical ideas.? How far do you agree with this statement? Explain your answer. [8 marks] Romans were dependant on the Greeks for many of their ideas, but they had included some their own during the Roman Empire. The Romans were dependent on the Greek for some of their medical ideas because the Romans had invaded the Greeks and during that they took over their medical library were all of their medical knowledge and recording had been kept, therefore the books and records were used throughout the Roman period. ...read more.

As the Roman?s were intending to invade several places, their army and soldiers had to be strong, therefore medicine had to be effective in order for soldiers. The Roman?s had clean street and a clear public health system that involved getting rid of bad smells and bad air. Although there were problems with this and nobody knew the cause of disease was germs, the Roman public health system did benefit the people because by chance taking away bad air and smells took away some of the germs in the air and therefore preventing disease. This was idea created in the Roman period showing they were not completely dependent on Greek ideas. There were no major Roman theories created during the Roman empire, but it was the Roman way of life that impacted medicine, therefore Romans were dependent on Greek medical idea and theories, but had a different way of life. ...read more.